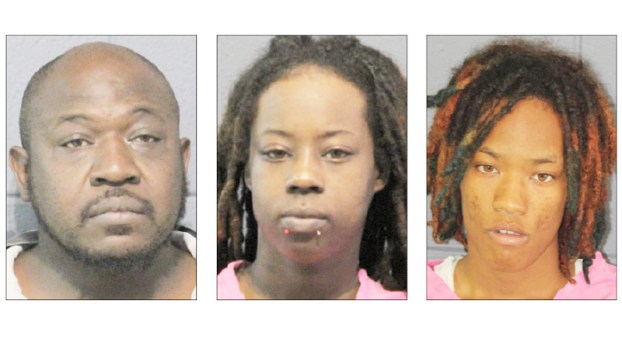 LAPLACE — Four people were arrested Wednesday on armed robbery, burglary and attempted carjacking charges in connection to a spree of crimes in St. John the Baptist Parish.

Authorities said the suspects also fled from police, leading to a high-speed chase.

“This group of criminals caused a mini-crime wave in a short period of time,” Sheriff Mike Tregre said. “They inflicted physical and emotional pain on victims, who were going about their daily lifestyles.”

Tregre praised all officers who worked the case.

“This was a total team effort between multiple agencies,” he said, “but I have to give tremendous credit to our dispatchers who gathered all details from each robbery in a short period of time and relayed it to patrol officers, which was instrumental in making the apprehensions.

“All of these violent suspects were taken into custody without injuries to them, the public or officers, especially with an 8-year-old child in their vehicle. We are preparing thorough and detailed cases for the District Attorney’s Office so that they will be held fully accountable for their actions.”

The first armed robbery occurred at 7:40 p.m. Tuesday in the 100 block of Riverside Drive in Reserve. Upon arrival, officers learned a 14-year-old male was using his iPhone, standing outside his home, when he noticed a midsized SUV drive towards him.

A young slender subject, wearing a black hooded shirt, exited the passenger side and demanded his phone and belongings. When he refused, the subject, later identified as the juvenile, pointed a handgun at him then struck him in the mouth with the gun.

After handing over the phone and cash, the suspect fled in the vehicle. The victim refused medical treatment.

About 8 p.m. Tuesday, officers responded to a parking lot in the 1300 block of West Airline Highway in LaPlace in reference to an attempted carjacking.

Upon arrival, officers learned the 41-year-old woman was sitting in her vehicle with the vehicle running when a young subject, later identified as the juvenile, wearing a black hooded shirt approached the driver’s window, pointed a gun at her and demanded she get out the vehicle.

The victim then sped away, and the suspect fled the scene. The victim was uninjured.

About 8:45 p.m. Tuesday, officers responded to the 200 block of Somerset Street in reference to an armed robbery. Upon arrival, officers learned an elderly couple was exiting their vehicle when two people approached them, one wearing a black hooded shirt and the other wearing a black T-shirt.

One subject, later identified as the juvenile, pointed a gun at them and demanded the 70-year-old female’s and 60-year-old male’s belongings.

When the woman refused to hand over her purse, the juvenile began to strike her with the gun while the other subject, later identified as Smith, hit her husband.

When the couple gave up their belongings, the perpetrators fled on foot.

Emergency medical services arrived on scene and took the couple to a local Hospital, where they were treated and released.

Through investigation, officers located the suspect vehicle, which had been reported stolen by the New Orleans Police Department.

As officers initiated a traffic stop on the vehicle on U.S. 51 near Woodland Drive in LaPlace, the driver, later identified as Ward, refused to stop.

A pursuit ensued as Ward sped eastbound onto Interstate 10, then I-310 where St. Charles deputies and Louisiana State Police joined the pursuit, ending at the Highway 3127 off ramp, where Ward stopped the vehicle and fled on foot into the marsh.

Officers detained the passengers — Green, Smith and the juvenile.

Shortly after, Ward came out of the marsh, and she was detained.

Smith’s 8-year-old son also was a passenger. He was turned over to his grandmother.

Ward is charged with two counts armed robbery with a firearm (felony), attempted carjacking (felony), illegal possession of stolen things (felony), and aggravated flight from an officer by vehicle (felony).

Bond has not yet been set for Ward, Green and Smith.

The juvenile was charged with two counts armed robbery with a firearm (felony), simple burglary, attempted carjacking (felony), and was wanted on a juvenile probation warrant from the New Orleans Police Department.

The juvenile has been transferred to the New Orleans Juvenile Center.

Based on investigation, the group may be tied to several crimes being investigated by surrounding agencies.

LUTCHER — Funding for the West Shore Levee Project is locked down and no longer vulnerable to reallocation. That development... read more