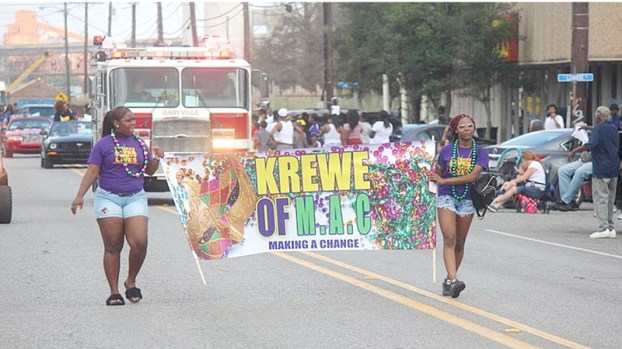 Even without a Krewe of M.A.C. parade in 2019, organizers said the community group will continue giving back to St. James Parish and its residents.

LUTCHER — The third annual Krewe of M.A.C. Mardi Gras parade is cancelled in light of public safety concerns that have perpetuated fear in St. James Parish in recent months.

Originally scheduled to ride through Gramercy and Lutcher Mardi Gras day (March 5), Krewe of M.A.C. was set to deliver family fun with a “Disney on the river” procession of floats, cars, dance teams, bands, Disney characters and Parish officials.

The decision to cancel came in response to the Feb. 11 shooting death of Destin Smith, 22, of Gramercy, in the Oscar Brooks Apartments in Lutcher.

Clark has residential ties to Gramercy and LaPlace, authorities said.

Two others were injured in the shooting, including a 15-year-old from Lutcher.

Ken Brass, Krewe of M.A.C. organizer, walks the route during the 2017 parade. Brass said the “vibe of a fearful atmosphere” contributed to the 2019 cancellation decision.

“We’d gotten the vibe of a fearful atmosphere with everything that has recently occurred,” Brass said.

“We felt it was in everyone’s best interest from a safety standpoint to cancel this year’s parade and ultimately start planning for next year’s parade after the violence is under control.”

In a release sent to St. James Parish officials, the Krewe of M.A.C. noted the tremendous support from locals and law enforcement and ended the notice of cancellation with a prayer to “work together on one accord to combat violence.”

“The Krewe of M.A.C. is going to take the initiative of working with local government agencies as far as seeing what we can do to mentor our youth and come up with solutions to reduce the crime level in the River Parishes area,” Brass said.

Those conversations are set to begin after Mardi Gras.

Though the parade was cancelled, Krewe of M.A.C. celebrated a semiformal Mardi Gras on the River ball Saturday night at the St. John Parish Community Center in LaPlace.

Brass said Krewe of M.A.C. has no plans to slow its community impact.

Short for “Making a Change,” Krewe of M.A.C. has honored senior residents of the River Parishes, hosted a banquet for the region’s biggest impact-makers, donated bikes to children in need and gifted $500 scholarships to five St. James high school seniors since 2017.