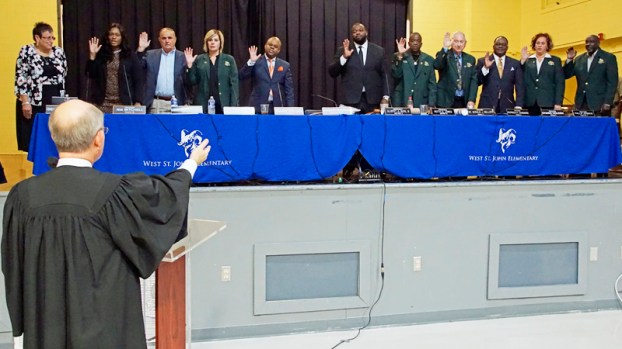 District Court Judge J. Sterling Snowdy swears in members of the St. John the Baptist Parish School Board during the Board meeting Jan. 10 in Edgard.

RESERVE — Schoolhouse leaders with Louisiana Premier Charter and the St. John the Baptist Parish School Board are butting heads about the Charter’s potential opening for academic year 2019-20.

With last August’s vote of nine in favor and none against (there was one abstention and one absent), the School Board approved an agreement with Louisiana Premier Charter, paving the way for it to open as a kindergarten-through-ninth-grade campus, hosting 50 students in each grade from kindergarten through eighth and 75 students in ninth grade.

The charter campus would then expand one grade level each school year thereafter, serving 75 students per high school grade and concluding with 750 students after full expansion.

The charter’s plan must also receive Justice Department and federal judge approval before the school opens. As of yet, neither has been granted.

Louisiana Premier Charter announced last week that it would operate on the campus of Riverside Academy, via a lease agreement.

Louisiana Premier Charter will operate as a kindergarten-through-ninth-grade school in 2019-20, while Riverside will continue to serve students from preschool through high school.

The two institutions will act independent of each other but share use of a parking lot, gym, cafeteria and athletic fields. They will not share students.

School Board members chose not to take action on a monitoring, extension and renewal policy for the Charter School when they met last week, setting up the agenda item for discussion and vote next month.

During an executive committee meeting this week, School Board member Debbie Schum said the Charter’s evaluation tool for rating its annual success is less than what the state uses.

“They don’t have it spelled out quite as detailed as the state does on how they will meet the indicators,” Schum said.

“We don’t plan on maintaining a C; we’ll be a B or A, for sure,” Andrews said. “Our curriculum is going to be high quality Tier 1. Our teachers are going to have time for planning and collaboration. It’s going to be way above board.”

Finance director Felix Boughton doubled down on that sentiment, telling School Board members he guarantees Riverside is not compliant with all building and code upgrades.

Andrews agreed, saying charter officials did a walk through of the campus, which provided for a safe education environment.

“I know for a fact we can pull their bi-monthly fire safety reports,” Andrews said.

“All private schools have to have the same requirements and criteria as (public schools.)”

Kevin Klibert, School Board desegregation attorney, said the Department of Justice is concerned about the preliminary student numbers submitted by the charter school, specifically, “the Charter’s efforts to recruit African-Americans, because there was a disproportionately large number of white students who had applied.”

Klibert said he would be “very surprised” if the Justice Department approved Louisiana Premier’s application within 30 days, as charter officials previously said they expected.

Kelly Laco, a Department of Justice spokesperson, declined to comment when reached this week by L’OBSERVATEUR.

Andrews said the only student count information sent to the Justice Department came very early on in the process and did not reflect the amount of students who have applied in recent weeks.

“It was kind of hard to go and start advertising when you don’t have a  site,” Andrews said. “Parents want to know everything. We have already started our campaign and we are definitely advertising more.

“Our numbers are starting to increase.”

Andrews said she welcomes the opportunity to provide a charter school presentation in front of the School Board — “anything I can do to help clarify anything we are doing; we want to be transparent.”

During the School Board’s executive committee meeting Tuesday, attending members voted to request a meeting with Charter School members before the next Board meeting.

RESERVE — Applications are being accepted for the 2019–20 Head Start and pre-school programs in St. John the Baptist Parish.... read more