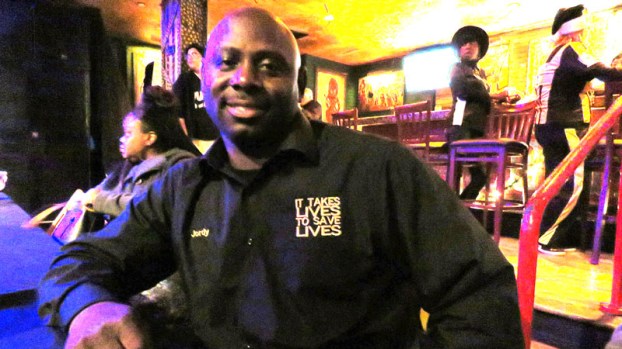 LAPLACE — The adult behind supposed organ-transplant-awareness charity “It Takes Lives To Save Lives” was arrested by the DEA in LaPlace Thursday night and faces a federal court hearing Monday afternoon, authorities said.

He is in the custody of the U.S. Marshals Service and being housed without bond in St. Charles Parish.

Debbie Webber, DEA spokeswoman for the New Orleans field division, said Jordy was the only person arrested this week; however, she would not go into detail about if other suspects were being sought in relation to Jordy’s charges.

“It is still an ongoing federal investigation,” Webber said.

Jordy’s next court appearance is scheduled for 2 p.m. Monday.

The couple is not together, and the children live with Patricia and attend school in Donaldsonville.

Patricia told L’OBSERVATEUR today that her children are devastated by the news of their father’s arrest.

“It doesn’t surprise me that (Jordy) got arrested,” Hoyal said. “That is his lifestyle. That is what he does. It’s not shocking. My son Tiyquan tells me everything, and (Jordy) sells drugs in front of the kids. It’s nothing new. Tiyquan has told me on numerous occasions that he has sold drugs in front of them. I have contacted the police department, but nothing is done about it. But now it is, so thank god.”

Hoyal said Jordy recently paid her $13,000 in late child support payments using funds from the “It Takes Lives To Save Lives” foundation.

According to Hoyal, Jordy routinely used J.J.’s fame, likeness and recognition through appearances to falsely generate donations that were routinely used outside their intended purposes.

Hoyal said she is most troubled by those in the community who feel J.J. was in on the fraud, something she and law enforcement maintains is not true.

“My son just called, the 15-year-old; he asked could I come and get him from school,” Hoyal said. “‘My daddy’s in jail?’ I was like, ‘yeah.’ He said, ‘there are a lot of kids coming up to me, showing me pictures and stuff of my daddy. I just don’t want to deal with that today.’

“(J.J.) didn’t go to school today because he had a doctor’s appointment. He just called me crying. I had already sat down and explained it to him that this was going to happen. I tried to get him ready for this as much as I could. I don’t know if I did good enough on that part.”

J.J. — a national celebrity making public appearances throughout the River Region and nation — was born with biliary atresia, a rare liver disease found in infants. He received a partial liver transplant (a piece from a donor) at 1 and spent a year in a coma. The disease stunted his growth to where J.J. looks much younger than he is.

With organizations like the New Orleans Saints, National Football League and World Wrestling Entertainment backing him, J.J. was put front and center into the national consciousness promoting organ donation.

The Advocate reported today the organization is not listed with the Internal Revenue Service as a tax-exempt nonprofit.

In promoting his foundation, Jordy previously stressed he wanted people to check the box on their driver’s license, but he also wanted to create a smart phone app that would allow people he and Jarrius met to sign up on the spot.

“A lot of people say they will sign up, but they don’t,” he said in a previous L’OBSERVATEUR interview. “They forget about it.

“It’s not just about people battling liver disease. It’s for people who are fighting all kinds of diseases. It takes a life to save a life, to help somebody out. You don’t have to die to save somebody’s life. You can give blood. You can be a living donor. Jarrius is an inspiration to a lot of people, but we are inspired by a lot of people too.”

Update: No forced entry into man’s home where he was shot & killed

RESERVE — It had been longer than normal since anyone had seen or heard from Ashton Fleming. That led to... read more