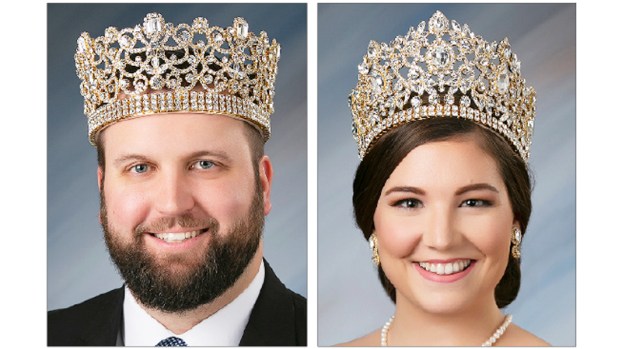 Michael P. Wright and Danielle Brignac, each of LaPlace, will share the spotlight as King and Queen Du Monde XL in the River Region’s largest Carnival celebration.

The current Krewe Du Monde activities are run by and for the benefit of the Lion’s Club of LaPlace.

This year’s ball theme is “Do You Believe in Magic?” and the fun starts at 7 p.m. March 1 at the St. John the Baptist Parish Community Center.

Doors open at 6 p.m. Tickets, which are $80 per person, can be purchased at laplacelions.club or Roussel’s Fine Jewelry & Gifts in LaPlace and Gramercy.

The parade hits the streets of LaPlace March 3, starting at 11 a.m.

Michael is married to Erica A. Wright. He is a senior manager with Fresenius Medical Care North America (Sales & Account Management) and sits on the Board of Directors of the National Kidney Foundation of Louisiana.

Danielle Brignac is the daughter of Jane and Kerry Brignac. She is a graduate of St. Charles Catholic High School and Southeastern Louisiana University.

She is a special education teacher in St. Charles Parish with plans to pursue her master’s degree in the near future.

The Queen’s page is Olivia Guillot, daughter of Jessica and Ryan Guillot.

Captain Chris Boucvalt, a LaPlace resident, is married to Lesli Boucvalt. Their children are Luke and Will.

Chris is an engineer for Verizon.

Duke Troy Roussel, of Paulina, is married to Stacey Roussel. Their children are Kadynn, Karson, Cooper and Carter.

Troy is an enterprise manager for Cox Business.

Maid Avarie J. Louque, of Paulina, is the daughter of Della and Scott Louque.

She is a graduate of Lutcher High School and a current student at Louisiana State University, majoring in kinesiology pre-med.

Duke Jason Beber, of Reserve, is married to Shanna Beber. Their children are Jenna, Matthew, Ryan and Landon.

He is a principal in the Jefferson Parish Public School System.

Maid La’Deja M. Harris, of LaPlace, is the daughter of Danielle and Michael Davis Jr.

She is a graduate of East St. John High School and a student at Grambling State University.

Beau and Lori Grady Noel reside in Destrehan with their three children: Landon LeBlanc and Alex and Nathan Noel.

Maid Korinne M. Kimble, of Norco, is the daughter of Kristy and Kenny Kimble.

She is a graduate of Destrehan High School and is attending River Parishes Community College, studying process technology.

Duke Jack Harris, of Montz, is married to Erica Harris. Their children are Dominic and Grayson.

Maid Alexis Michelle Breaux, of Paulina, is the daughter of Candace and Michael Keller.

She is a graduate of Lutcher High School and is enrolled at Nicholls State University.

Duke Dustin Roussel, of Lutcher, is married to Monica Roussel. Their children are Karson and Kinsley.

He is a physical therapist at Cypress Physical Therapy.

Maid Nicol Mae Bourgeois, of Gramercy, is the daughter of Tanya and Chad Bourgeois.

She is a graduate of St. Charles Catholic High School and is attending Louisiana State University.

He is retired from Marathon.

Maid Meredith Keating, of LaPlace, is the daughter of Lori and Todd Keating.

LAPLACE — “SJA Turns on the Jukebox” as it presents its royal courts of Krewe Jeanne d’Arc XLIV. The junior... read more