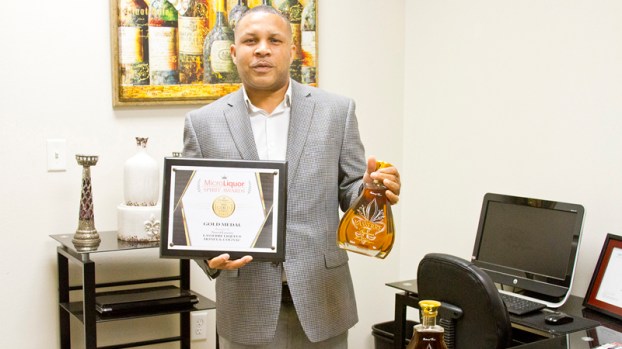 LAPLACE — Norvel Lasserre of LaPlace co-created the only African-American owned liqueur brand sold in Walmart locations across Louisiana, and he now has the national accolades to propel his business to new heights.

Lasserre Honey Cognac, an emerging brand created in 2014, was recently awarded the 2018 gold medal for best tasting cognac at the Microliquor Spirit Awards in San Francisco.

Produced in France and stocked at a Reserve warehouse, Lasserre Honey Cognac is known for its smooth taste as the only honey-blended cognac in the United States.

“When people are choosing to try something new, seeing this is an award-winning brand can help a person decide to try it out,” Lasserre said.

Lasserre is proud to be an inspiration to other African American businessmen.

The journey started five years ago, when Lasserre was wrapping up an international trade course at the World Trade Center.

He began researching products to import or export and was intrigued to discover French wine bottles bearing his family name.

He delved into genealogy research and found out his fifth generation great grandfather, Blaise Lasserre, was a French farmer who owned wine vineyards.

By March 2014, Lasserre had booked a flight to Lyons, France, for a business forum.

“I was a little fearful because it was my first time ever traveling outside of the country,” Lasserre said. “When I got to the business forum, my plan was to just show my face the first day and then kind of sneak away the second day to South France to do my research.”

Plans changed when Lasserre attended the greeting ceremony and observed more than 500 business officials from 39 countries around the globe.

When Lasserre realized he was the only African American in a sea of people, he couldn’t leave.

“I had to abandon my family research when I saw how big this event was,” Lasserre said. “I knew some type of opportunity would come out of it. I just didn’t know at the time what it would be.”

Lasserre’s intuition proved correct when he met Siebe Hartmans, who would soon become his business partner based in Cognac, France.

Norvel Lasserre stands by shipments of Lasserre Honey Cognac in the Reserve warehouse. He has plan to expand to a larger office space as the brand grows.

Hartmans approached Lasserre with an offer to help create a new cognac drink.

“When I met Norvel, we had a very good feeling together to start something new,” Hartmans said. “Norvel told me about how he drank Cognac, and it inspired me to create a liqueur.”

Hartmans and Lasserre enlisted the help of a master blender to create Lasserre Honey Cognac, and they are pleased with the results.

“It’s quite unique, especially by its taste,” Hartmans said. “We were the first to include natural honey for a really good taste. We’ve had a lot of compliments from professional tasters, and that makes me confident in the success of this brand.”

Lasserre Honey Cognac is available at Cheap Smokes, Mini Hui Mart and Walmart in LaPlace, as well as other select Walmart locations across Louisiana.

The liqueur is also available in six states across the country, with growing global prospects, Lasserre said.

“It’s not just a local brand or a Louisiana company,” Lasserre said. “I want to be an inspiration to the community so people know all things are possible with God. It doesn’t matter where you come from, who you are or what color you are.”

Lasserre is setting his sights on an upcoming San Francisco World Spirits competition to be held this spring.

EDGARD — A March 25 trial date is set for the LaPlace Feed & Supply burglary-turned-homicide that claimed the life... read more