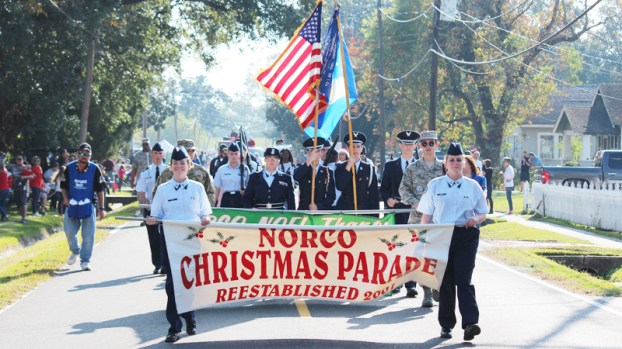 The Norco Christmas Parade will roll through the streets of Norco on Sunday, Dec. 2 with the theme “Norco Noel: Santa celebrates our local sports teams.”

The lineup includes the bands from Destrehan High School, Riverside Academy and Harry Hurst Middle School. The parade also will welcome the return of the 610 Stompers men’s dance troupe.

Santa will arrive by helicopter to the beginning of the parade, landing on the Mississippi River levee at approximately 1:30 p.m. After the parade, Santa will be available for free photos with children by the community Christmas tree on Apple Street. Each child will receive a giant candy cane.

The family-friendly event was a River Parishes staple in the 1970s and 1980s before being discontinued. A group of local citizens, including Norco native Stephen Weber, helped revive the parade in 2001.

It has rolled annually since, except for 2005 following Hurricane Katrina and in 2016 when the parade was rained out.

All participants are strongly encouraged to follow the theme of the parade or the overall Christmas theme in their decorations, costumes and music.

Anyone interested in participating in the parade may visit norconoel.com to download and print an entry form, which must be returned by Nov. 21.

BOUTTE — A Thursday night disagreement in Boutte ended in gunfire, two arrests and one man in the hospital, police... read more