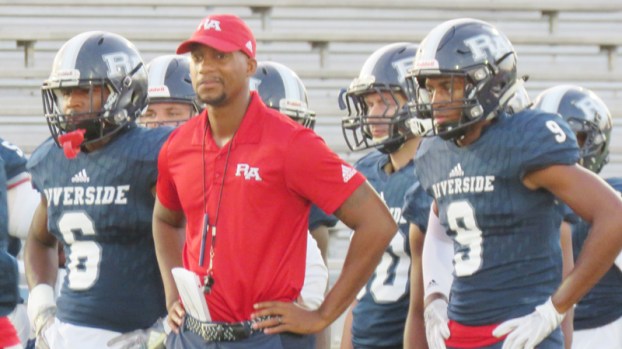 Riverside coach Kevin Dizer is seen before a regular season game during the 2018 season.

Ascension Episcopal ends Riverside’s season in 1st round of playoffs

The road trip to play Ascension Episcopal was long Friday, and the road back home probably felt longer after the Rebels fell 35-13 to the Blue Gators.

Riverside ends the season 3-7, while Ascension Episcopal (9-2) advances to the second round of the Division III playoffs.

Riverside coach Kevin Dizer told his seniors to take the lessons learned this year and apply them to their lives, because that’s “what it’s all about.”

“To the rest of the team, the kids that are coming back, we don’t ever want to have this feeling again,” he said. “We don’t want to ever be a program that’s getting beat in the first round. That’s my mission. I want to put this type of year behind me and I don’t want to ever experience it again.”

Dizer said his coaches knew the obstacles they were up against when this season began.

“There was not a long list of people who wanted the job,” he said. “We probably only had 20-something kids who were with the program at the time. It’s been an uphill fight for us, as a coaching staff, so for the kids that stuck with it and the new ones we had that came out, that’s a real big deal.

“Participation is not something that is recognized in this world enough, in my opinion, and for a kid to honor his commitment and stick with the team, that’s huge for me.”

RESERVE — Riverside Academy rebounded from an 0-4 start to finish with three victories in its final five games, setting... read more