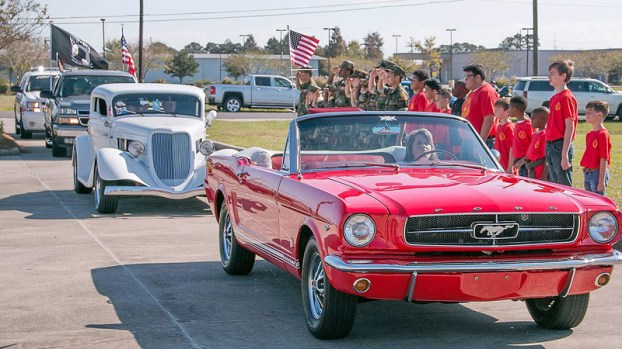 RESERVE — In eight short years, the St. John Parish Young Marines Veterans Day festivities have grown from a 100-person gathering to a parade and program attracting as many as 1,400 people.

This year’s parade kicks off at 11 a.m. Sunday in front of the LaPlace Home Depot and travels down Airline Highway to the Southeast Louisiana Veterans Home, located at 4080 W. Airline Highway in Reserve.

A short program will follow at the Veterans Home, featuring food, music from the Harold Warren Band and Korean War veteran Lester Krumholt as guest speaker.

The celebration doesn’t end on Sunday; a special guest from the New Orleans Saints and representatives from United Healthcare are starting National Do-Good Week at 10 a.m. Monday with the first Southeast Louisiana Veterans Home talent show.

The talent show is held in honor of Jack Hyman, the resident who spearheaded the idea and sadly passed away last month before he could see it come to fruition, according to director Sonya Hebert.

Hebert said the talent show is open to the community at no fee and presents a chance for Veterans Home residents to get involved in the acts, even if it’s something as simple as accompanying the performer on stage with hums or tapping a drum.

Some of the veterans have signed up to perform individual comedy acts, Hebert said.

“The veterans love stuff like this,” Hebert said. “The community is so active with the home, and it makes such a difference. They feel honored and they love the fun. The veterans, the families and the staff appreciate people who go the extra mile for them.”

Hebert said this year’s celebration honors the 65th Anniversary of the Korean Armistice Cessation of Hostilities and encourages support from Korean War veterans.

Young Marines unit commander Brian Bertrand said all are invited to join the parade, no registration fee or sign up required.

The classic cars in particular garner a lot of excitement from the veterans, Bertrand said.

Young Marines march at the front of the parade so they can take a detour and make it to the Veterans Home prior to the program’s start.

Bertrand said hosting Veterans Day activities gives the youth an understanding of what veterans stand for.

“They may think of a veteran as someone who was in the service, but they don’t truly know what they are all about,” Bertrand said.

“For example, Kuwait couldn’t stand up to Iraq, so American military went over to help. That’s what the Army is about. These people volunteered to defend in the name of freedom. They deserve one day to be told thank you.”

According to Bertrand, the Young Marines visit the Southeast Louisiana Veterans Home after Saturday training sessions and add small donations to their bingo pot.

After Thanksgiving, the Young Marines raffle off gift card baskets and use proceeds to purchase Christmas gifts for Veterans Home residents.