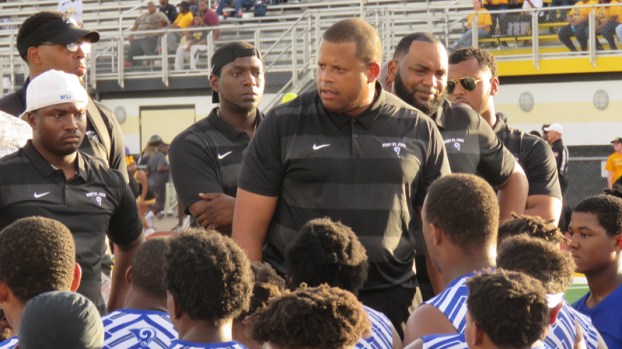 Rams coach Brandon Walters speaks to his team before a game this season.

EDGARD — West St. John High coaches and players aren’t getting game ready this week, as the Rams have a bye through Week 9 of the regular season.

The open date comes at a perfect time for WSJH (6-2, 2-0 in district,) which just completed a difficult five-game road trip, culminating in a hard-fought 24-6 win over district foe Varnado.

If you expand the scope out a little bit more, West St. John has actually played seven of eight games this season on the road.

“We’ve been on the road for so long, if the stadium wasn’t behind the school, I don’t think the kids would know where it was,” Coach Brandon Walters said. “It’s extremely stressful. This was a big challenge for us. I’m just glad the kids handled it well.”

Thankfully for West Bank football fans, the Rams return to Edgard Nov. 2 for a combined celebration of homecoming and senior night.

The defending state champion Rams have their sights set on another title, and there are plenty of reasons to believe in a successful 2018 playoff run.

West St. John’s running game is as strong as any in Louisiana, with Kylan Duhe, Niko Roy and Wantrell Williams — who each scored last week — providing fits for opponents.

Duhe looks like the frontrunner for River Parishes Offensive MVP as a 30-touchdown season is within the senior’s reach.

Walters said he leaned heavily on his running game last week out of necessity because of limited options at quarterback, where starter D’andre Gaudia was not a full go. That rhythm buster led to more than a dozen penalties against the Rams.

“It’s not always going to be easy and pretty, where we can just throw the ball where we want to on people,” Walters said. “We still have to execute and do what we do well. Minimizing the penalties is the biggest thing for us. A lot of runs (last week) were brought back. We would run a play, go all the way and it was holding or something else. It really got kind of ugly.”

Despite having only one win this season, Walters said Varnado boasts a talented and scrappy group of student-athletes.

“Next year, they are going to be even tougher,” he said. “I talked to the coach. When he told me they didn’t have much, I knew I didn’t believe that. I knew their kids were going to come and play. The district has improved starkly.”

Walters said his goal this week in practice is to clean up common mistakes and get everybody healthy.