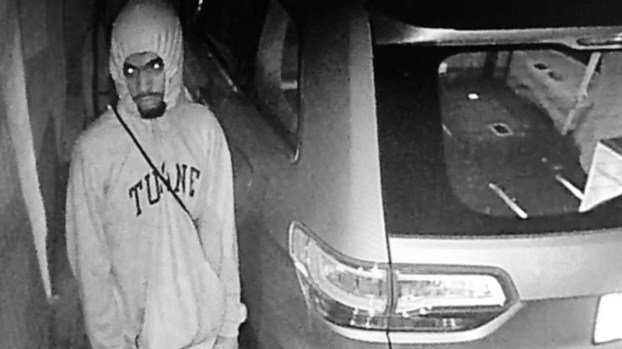 Police said the male subject pictured is one of three suspects responsible for a string of recent LaPlace vehicle burglaries.

LAPLACE — Three men prepared to use gun violence, if necessary, have targeted St. John the Baptist Parish vehicles for burglary as part of a string of crimes throughout Southeast Louisiana, police said.

“They are taking anything they can grab,” St. John Sheriff Mike Tregre said. “What we’re looking at, after being in constant contact with other parishes, are other parishes having the same type of crime. We’re comparing videos, and it appears these guys are traveling in multiple jurisdictions. The clothing, the physical characteristics, the method of operations, it matches some other cases in other parishes.”

In an effort to draw eyeballs to the men believed responsible, via video surveillance, the Sheriff’s Office released still photos and video of the burglars in action.

What caught the attention of many was surveillance video showing a man under a carport, pointing a gun at a door of a house where one of the burglaries took place.

There was violence in the air, police said.

“That is the way we perceive it,” Tregre said. “There is the threat of violence when you’re in a position holding a firearm on video. It leads us to believe he was prepared to become violent if necessary.”

Authorities said the perpetrators are pulling handles to try and find cars that are unlocked. Tregre said he met with numerous others Louisiana sheriffs Wednesday and nearly all of them said opportunistic criminals are taking advantage of easy scores, targeting unlocked car vehicles for burglaries.

Police: Thieves load up on stolen power drills from The Home Depot

LAPLACE — Two men carrying as many hand-held power tools as they could hold walked out of The Home Depot... read more