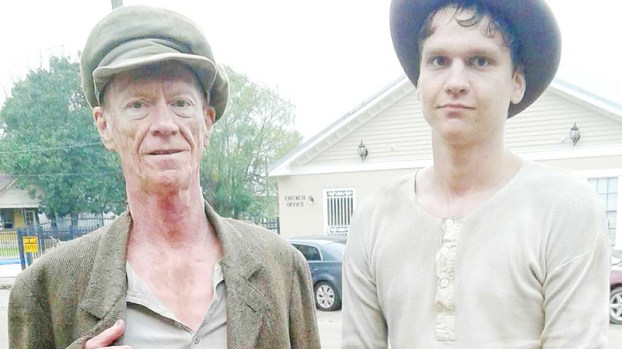 Leo and Jacob Bayard stand in period costume on the set of “The Highwaymen,” filmed locally for Netflix.

LAPLACE — Leo Bayard III of LaPlace helped his oldest son, Jason, score a role as an extra in the party scenes of the hit film, “21 Jump Street,” not knowing it would be the catalyst of his own journey into acting.

A casting representative called Bayard about playing a parent in the film. Before long, Bayard found himself sitting in the front row of an auditorium beside his pretend daughter and her friend during the Peter Pan scene, across the room from Channing Tatum and Jonah Hill.

Bayard has appeared in more than 60 feature films and television shows since that day, including “Walkaway Joe” and “Avalanche,” two movies currently filming in LaPlace.

In 2013, Bayard was thrilled to meet Sylvester Stallone in “Escape Plan” and “Grudge Match.” He’s filmed in Tom Cruise movies, shaken hands with Will Ferrell and appeared in popular television series “American Horror Story” and “Scream.”

“I caught the fever,” Bayard said. “Before 21 Jump Street, acting intrigued me, but it didn’t occur to me at all that it was something I would do.

“Now it’s been seven years, and it’s a hobby for me. You get to be near these A-list actors, these living legends. You meet interesting people of all colors, all shapes and all sizes and realize everyone has their own role to play.”

The elder Bayard was a purple heart veteran and an acclaimed New Orleans boxer who stepped into the ring for the final time at age 74, emerging victorious against opponents 20 years younger.

Bayard Jr. appeared in the 1950 film “Panic in the Streets” and had a speaking role in the controversial 1978 Brooke Shields film “Pretty Baby,” for which his son still receives residual checks.

Though his father passed in 2005, Bayard has continued the tradition with a goal to land a speaking role.

Leo Bayard, left, plays a bartender across from the television stars in Hap and Leonard.

While his older son is no longer booking roles, Bayard has appeared in several films and television shows with his youngest child, Jacob, also of LaPlace.

In the 2017 theatrical release Happy Death Day, filmed at Loyola University in New Orleans, Bayard is the redheaded maintenance man working on the sprinkler system, while Jacob plays the college student who bumps into the leading actress and knocks books from her hands.

In the crime film “The Highwaymen,” which filmed in Garyville and is eyeing a Netflix release this fall, Bayard and Jacob were dressed in 1940s gear not far from Woody Harrelson and Kevin Costner.

“I wanted to try it out after my dad and my brother were in 21 Jump Street,” Jacob said. “It’s a big accomplishment to see yourself in a movie. It’s definitely noticeable. People have called me to say they saw my dad on TV.”

When coming on set as an extra, Jacob said it’s important to listen to all directions from the producer.

Bayard said being an extra or a stand-in takes a lot of patience.

Those who stick it out are rewarded with two meals a day, haircuts matching the era and location of the film, about $100 in compensation per day and the chance to meet celebrities.