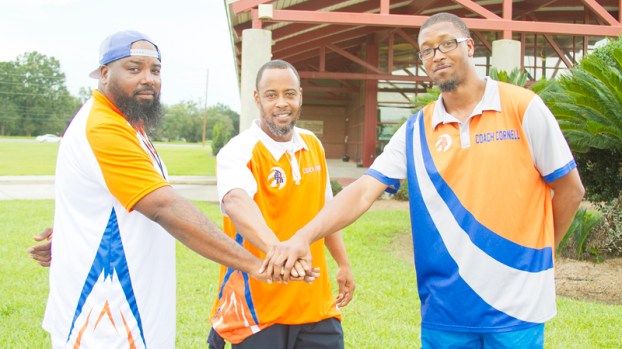 Though he was more acclimated to the East St. John High School football field, Garabold said Watkins made him feel right at home and presented opportunities to develop his skills while traveling for tournaments.

“I didn’t have any experience with high school basketball,” Garabold said. “It’s not all about experience and skill. He will let you try out. Even if you’re not the best, he’ll find a spot for you on the team if he thinks it can help you stay off the streets.”

In 13 years of coaching AAU basketball teams, including the former St. John Heat, Watkins learned there is an undeniable link between sportsmanship, character, teamwork and respect.

“I started this organization because youth in the community really don’t have anything to do after recreational basketball ends,” Watkins said.

“This gives kids opportunities to build relationships with each other and learn how to rely on each other, not just in the game of

basketball, but in the game of life.”

Watkins said the winning record is a testament that the boys play with heart, fueled by the excitement of waking up in new cities and playing in a competitive atmosphere.

“It gives them more exposure to scouts than they get from playing high school or rec basketball,” Watkins said.

Over the years, Watkins says he has helped at least seven of his AAU players land college scholarships.

Some of the players have lived with his family in times of need. Whenever team members struggle in school, he and his wife, Dulce Michelen, sit down to tutor them.

Devin Guitroz, 10, said several of his Louisiana Raptors Elite teammates are on the all ‘A’ honor roll.

Over the past year, Devin has enjoyed “traveling around the world” and refining his skills as point guard.

According to Devin, being a leader requires a lot of hard work, patience and dedication. He said those qualities come from balancing weekday practices and weekend travel with schoolwork and service.

Fifth grade coach Delvin Guitroz is happy to be part of an organization that gives his son and other children an active role in the community.

“It helps with raising our youth, and it keeps the focus on building character,” Guitroz said. “There are a lot of things that the younger generation has access to, and sometimes it’s poisoning their brains. If we keep the focus on basketball and growth, we’ll be able to do some good.”

Coach Cornell Watkins is pictured with some of Louisiana Raptors Elite’s several awards and trophies.

Other coaches include Theron Tatum and Corey Hamilton Sr.

Watkins said Louisiana Raptors Elite is looking to add a middle school team before the AAU season starts in February.

Enrollment is open through January for $150 per player.