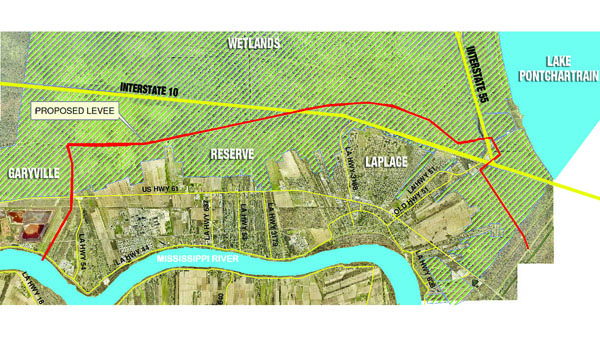 LAPLACE — St. John the Baptist Parish President Natalie Robottom said she wants to be certain the parish has a seat at the table during planning meetings regarding the mammoth $760 million levee protection project recently approved.

Robottom told Parish Council members last week that during an initial meeting of several agencies that included the United States Army Corps of Engineers and the Pontchartrain Levee District it was determined monthly meetings would be scheduled and the parish would be provided updates. But Robottom requested the parish be involved because “if you’re giving us updates, you have already decided.”

She said those meetings are scheduled for the levee district’s office in Lutcher.

She committed to providing Council members with updates but warned “things are very fluid right now. The corps is interpreting some things (the way) they want but that was never the intent. So there are some issues.”

Robottom said the entire $760 million in funding was sent up front, which is beneficial because once the project is 50 percent completed, existing flood maps can be changed to reflect the increased protection, potentially lowering insurance rates.

“We can have the flood maps before the project is changed,” she said.

Robottom said the other benefit is neither parish nor the levee district are required to front any funding, which is apparently a sticking point with the Corps and an issue that has gone to the office of Congressman Garrett Graves for clarification.

Graves, as chair of the Water Resources and Environment Subcommittee, was instrumental in having the project funded.

“They are really trying to move this along,” Robottom said.

The project, which will be designed by the Corps, includes earthen levees, flood walls and pump stations, and will include areas from the Bonnet Carre Spillway to the Hope Canal in Garyville.

Also scheduled are ring levees to be built around Gramercy and Lutcher in St. James Parish, providing added protection to those areas.