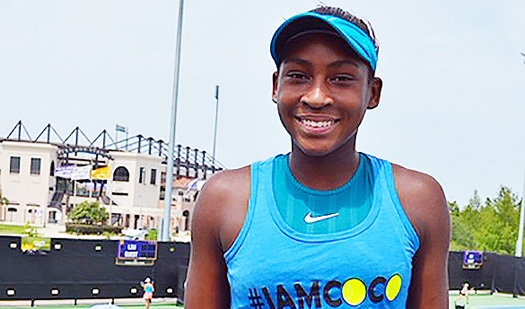 RESERVE — In between matches at a professional tennis tournament in Baton Rouge this summer, the youngest U.S. Open Junior finalist of international acclaim passed the time running races against her St. John the Baptist Parish cousins.

At age 14, Cori “CoCo” Gauff of Florida has swung a tennis racket in Australia, France, England, Mexico and the Czech Republic, among other countries.

She defeated Caty McNally to win her first junior Grand Slam championship at the French Open and nearly won back-to-back junior titles in Paris and London after falling in the quarterfinals just a few weeks back at Wimbledon.

She’s a tennis star on the rise, having already met her idols Serena and Venus Williams and competed in Wimbledon. Whether she’s coming off a win or a loss against talented professionals twice her age, she knows she can always count on the comfort of her great aunt Myrtle Lucas’s home-cooked potato salad and gumbo.

Lucas, of Reserve, described her family as large and impressively athletic, separated geographically for most of the year but always connected by heart.

She watched CoCo play in Baton Rouge this summer and visited her family in Florida last December. Whenever CoCo’s travels bring her to Alabama, her Reserve family makes the drive.

CoCo’s father, Corey Gauff, was born in Reserve. He moved to Florida with his mother during his early childhood and later pursued a career in college basketball at Georgia State University. As a child, he returned to St. John Parish every summer, according to Lucas.

“Before he was old enough to fly by himself, I would fly to Florida every year and transport him here,” Lucas said. “When he graduated from high school and college, half the family flew out there to see him. He was a ball boy from when he was young, and he was the oldest of eight, so he was a little spoiled.”

Corey recalls playing tennis at the DuPont court during the summer, but he never grew into the sport with the same intensity as his daughter.

From a young age, CoCo displayed a “unique ability to concentrate,” according to Corey.

Her first shining moment came at age 8 in the “Little Mo” international tennis tournament in 2012. Over the years, CoCo has proved herself multi-talented by competing in basketball and track.

She enjoys tennis the most because of the opportunity to compete against girls around the world and learn about their cultures.

CoCo’s brother, Codey, recently won a baseball tournament, and her athletic cousins in Reserve compete in everything from dance to the AAU Junior Olympics.

Corey said CoCo, at 5’ 9”, is physically as large as most of the professionals and equally competitive, but she still finds time to be a kid.

“She wants to leave the game being one of the greatest who ever played,” Corey said. “It requires her to travel a lot, so it helps having social media and talking with a lot of her cousins.”

Despite not seeing her St. John Parish family as often, Corey said CoCo connects easily with her Louisiana cousins.

“In Baton Rouge, she was playing in a grown woman’s tournament and then going to play tag in the parking lot,” he said.