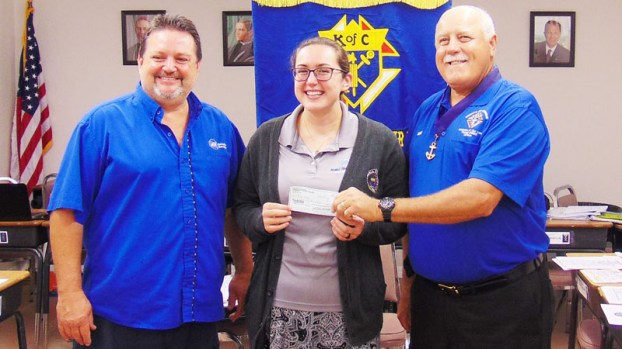 It was common to hear Eve Anders, as a young child, say her goal was to become a skateboarding Catholic Nun.

The LaPlace native and resident was encouraged by parents Dawnell and Mark to always pursue what the Lord called. That meant that a life of religious service was always considered.

The Catholic, liberal arts institution devoted to Mary the Mother of God is dedicated to the formation of joyful, intentional followers of Jesus Christ. It’s located in Southwest Florida near Naples.

It wasn’t Eve’s first choice — in fact, she wanted to travel north — but scholarship opportunities and other factors led to the unexpected destination.

“I was around a lot of new people and I am very extroverted, so it was great,” Eve said. “Right off the bat, people were like, ‘do you want to go to Mass?’ I had never had people my age asking me to go to church and really wanting to go to Church. People had a joy in what they did.

“I got back into the Church, went to Confession and started receiving the Sacraments again. It was a process over four years of learning truly what the Church features, what my relationship with Jesus was and what it is supposed to look like.”

Now 22 years old and back living in LaPlace, Eve said her college experience allowed her to grow up because she was away from her comfortable home and dependent lifestyle.

The learning experiences of college, including the chance to study abroad, eventually led to a major life decision.

She was interested in a young man but also drawn to Jesus and what life would be like as a Catholic Nun.

“There were a lot of conflicting moments,” she said. “Jesus was drawing me closer to Him. I was starting to desire my Lord as my spouse, which is a lot more than thinking, ‘this would be a cool lifestyle.’ No, I think the Lord is calling me into this and I want him as my spouse. I want to serve Him.”

During each travel to new countries, Eve instinctively visited missionary charity convents. She ultimately came across one with ties to Miami and cultivated her connection with the Florida nuns, spending many weekends with the group.

She now knows entering religious life as a Catholic Nun is her calling from the Lord.

Before she can step into the community officially, she must pay off her student loans.

“It is basically a vow of poverty and the community can’t take on that debt with them,” Eve says.

“Something a lot of young men and women are faced with is, ‘how do I pay off this mound of student loans?’ I am trying to get that under control while cultivating my spiritual life at home.”

Eve’s ultimate goal is Heaven and she says all of her actions should reflect that.

If it is not, there is a little bit of an issue, she jokes, adding God is never the problem.

“Stop comparing yourself to other people and look at you and your relationship with Jesus,” she says. “Is everything I am doing glorifying God? That is how we attain holiness.”

Keller: Do you know what the fleur-de-lis represents?

Recently, I was in the company of a young man wearing a muscle shirt with a big tattoo of a... read more