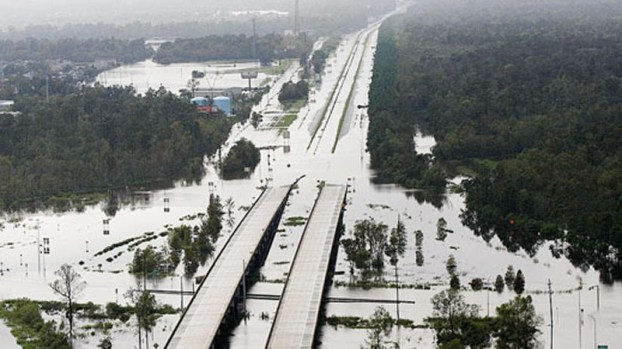 Hurricane Isaac flooded Interstate 10 and much of St. John the Baptist Parish in 2012.

St. John the Baptist Parish President Natalie Robottom says she knows people are impatient and questions about specifics have already started when it comes to the West Shore Hurricane Protection Project and how the $760 million in upfront federal dollars are going to be spent.

“They have already started: When are we going to turn dirt?” Robottom told me Thursday afternoon when we discussed the project by phone.

Robottom, who has been sidelined in recent weeks following an injury and subsequent rotator cuff surgery, said her next doctor’s visit is Monday, hopefully that last step in clearing her to return to the office on a full-time basis.

She knows that the focused attention of our parish’s residents is on her and various other local agencies and leaders who were gifted, quite surprisingly, with what they say is the full amount needed to construct St. John’s much-needed and much-delayed flood protection levee.

With money in hand, the River Region’s parish presidents, officials with the Pontchartrain Levee District and United States Army Corps of Engineers — and others, we’re talking 3/4s of a billion dollars — must work together to efficiently and effectively spend and build the largest storm protection project our region has ever seen.

That kind of task brings out some skeptics.

It’s didn’t take long for those sentiments to be shared online as L’OBSERVATEUER first published the news.

One poster shared: Once the levee is built St. John will be a soup bowl. Flooding issues will be worse & more widespread then ever before.

Another posted: Now the St. John Administration will blow 1/2 of it on more studies then get the kickbacks.

The great majority of our newspaper’s social media comment response was negative in reaction to the news. That’s not a shocking response when dealing with Facebook, mixed with politics and government projects.

Yet, we are a parish that only a year ago — 3,019 votes of yes (63 percent) compared to 1,788 against (37 percent) — approved a new 7-mill property tax initiative to fund the local share of a storm protection system designed to stop storm surge from getting into people’s homes.

Now the rest of the money is in place and it’s time for action.

“You don’t want your house flooding, so to have a protection system to prevent that is major,” Robottom said. “The other thing that is a byproduct is once you have levee and flood protection, then your flood insurance rate decreases because your risk decreases. There is a lot that goes along with this type of protection that residents and business owners will benefit from.”

A year in the making! It is finally official … the River Parishes have a fully accredited Community College. River... read more