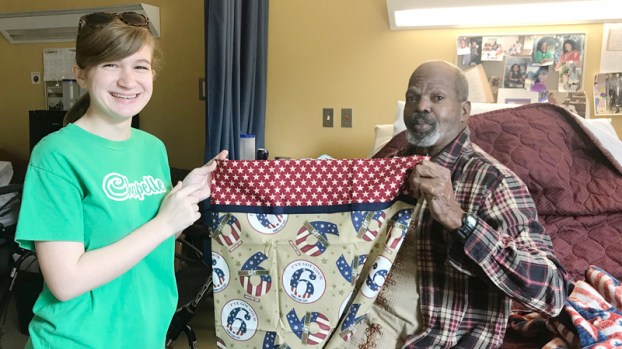 RESERVE — Robin Torres of Reserve never wanted to see another pillowcase again after voluntarily sewing 120 for charity, but the gratitude she saw from residents during a recent delivery to the Southeast Louisiana Veterans Home reaffirmed it was all worth it.

Robin, 16, participates in Archbishop Chapelle High School’s optional Gifted and Talented Program, an extracurricular that allows students to use their unique talents for outside-of-school projects demanding extensive time and attention.

A quilter since age 11, Robin knew she had a special talent in sewing, a lost art among the youth. She picked up the skill from grandmother Julie Vicknair and has crafted about 30 quilts during summer breaks.

While other students embarked on ambitious painting and mechanical projects, Robin chose to dedicate her project to service.

Robin Torres is pictured working at her sewing machine.

Trips to the Veterans Home and local nursing homes for choir brought Robin in contact with older adults who seemed lonely and in need of kindness. Prior to being accepted into Gifted and Talented in Fall 2016, her heart was set on donating 60 pillowcases to Veterans and 60 to nursing home residents.

A focus on pillowcases was a cost-effective choice that allowed Robin to use less fabric to reach a larger number of people.

“The project is meant to help those people in the veterans home and nursing home that hardly get visitors at all,” Robin said. “It’s something to brighten their day and let them know that someone is thinking about them.”

Robin Torres shows off her pillowcases.

Pillowcases designated for the Veterans Home were patriotic, with some geared toward certain sectors of the military, while floral and neutral patterns were reserved for nursing home residents.

The process was long and painstaking, with each fabric piece needing to be ironed, measured, cut to spec and carefully sewn.

Even the labels inside the pillowcases took 30 minutes each to print with special, waterproof ink and sew in.

Each label contains Robin’s name, school, a line for the owner’s name and a message reading “Thank you for your service” or “Because you’re special.”

Robin’s mother, Cathy Torres, said a name label was especially important to Veterans Home residents who have to sift through others’ laundry to correct inevitable mix-ups.

Most of Robin’s project was completed over the summer while she was home and tasked with babysitting her younger twin brothers, and there were times when it became overwhelming.

Pillowcases include patriotic and neutral patterns and name labels specially tailored to recipients.

“Towards the end of this project, there were a couple of moments where I thought, I am absolutely insane for choosing to do this,” Robin said. “Now, I wouldn’t change anything. I loved it. I think it’s really going to make someone’s day or year.”

Cathy Torres knew all along that her daughter would love interacting with the veterans.

“I’m proud of her for a lot of reasons, but I just think she’s got a big heart and probably an old soul,” Cathy said.

“She’s just so caring and compassionate for others. She just jumped right in and was very nice to the veterans. One of the guys stopped her and said it was really refreshing to see a ‘young’un’ doing such a good thing.”

Cathy said the excellence Robin displayed is characteristic of all she does, from honors classes to taking leadership positions in school clubs.

She described Robin as different from the norm in a good way, always one to bypass teenage drama in favor of hard work.

What stood out most to Robin about her project is how surprised people seemed that a young person would take on a service project.

“If a project like this has been done, it hasn’t been done in a long time,” Robin said.

“It was really eye opening to me because everyone wanted to tell me their stories, and it shows how much they need visitors.”

Robin will soon deliver her remaining pillowcases to nursing home residents, and she’s considering splitting the 60 between Twin Oaks Nursing and Convalescent Home in LaPlace and Chateau St. James in Lutcher.

In celebration of Easter, Ascension of Our Lord students in Lisa LeBlanc’s homeroom learned the Living Way of the Cross... read more