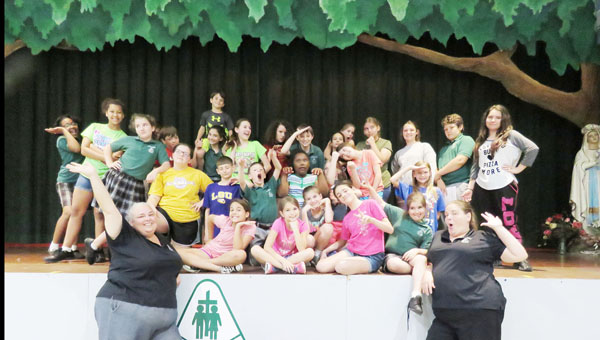 The cast of St. Peter Catholic School’s production of ‘Jacques and the Sugarcane Stalk’ pose in character for a group photo this week during practice. The St. Peter All-Stars will perform shows at 7 p.m. April 8 and at 2 p.m. April 9 at the school in Reserve. (Lori Lyons/L’OBSERVATEUR)

They wonder how the St. Peter Catholic School teacher and not-so mild-mannered librarian comes up with the things she does, often in the middle of the night.

“I’ll get a text from her saying, ‘What about this?’ and it’s the middle of the night,” said Vicki Mason. “I don’t know what’s going on in that brain of hers. I wouldn’t want to spend a lot of time in there finding out.”

Ilski’s creative brain is the wellspring of hilarious musicals produced at the small private school in Reserve.

Sure, everyone has heard of the classics like Snow White, Cinderella and the Wizard of Oz.

So, Dorothy, Toto and her gang followed the River Road instead of the yellow brick road, to New Orleans instead of Oz and had to fend off the Wicked Witch of the West Bank.

ABOVE: Wendy Ilski, far right, gives direction to members of the cast of St. Peter Catholic School’s production of ‘Jacques and the Sugarcane Stalk’ during rehearsals this week.

Cinderella had to get to the ball at San Francisco Plantation in the General Lee (the car from Dukes of Hazzard fame) with the help of her mobster-like Godfather with wings.

The Little Mermaid washed up on Grand Isle.

Next week, her All-Star Players will perform “Jacques and the Sugar Cane Stalk,” which comes complete with a wicked Voodoo Queen, Sugar Stalk fairies and a giant — portrayed by the shortest kid in the cast.

“It takes a team,” Ilski demurred. “I have these crazy visions and people really work hard to make them come true. Seriously, we make it up as we go.”

It all started when Ilski, who calls herself a “crazy librarian,” discovered that she had a group of talented actors and singers at her disposal.

“We had singers, we had dancers, but we had no drama club,” she said.

“So I went to the principal and said, ‘We need to do a play. We have the right kids.’ They’d come to the library and I’d tell them, ‘There’s no reading in the library. Let’s act it out.’”

Ultimately, she decided to try a play. When she got the script for the traditional Wizard of Oz, Ilski wanted to cry.

“It was so bad,” she said. “It was so boring. I said, ‘We just can’t do this.’ I’m thinking, ‘We have these fabulous kids and they’re going to do this horrible script.’”

Then, at 3:30 in the morning, she had an epiphany while watching The Blues Brothers on TV.

Since then, she has just written her own stories.

Ilski laughs when asked if she has always been a frustrated playwright.

“I’ve been to Broadway a couple of times,” she said. “That was always my influence because people were expecting this typical little elementary school show with the set falling down, the costumes too big, they don’t know their lines. It blew the audiences away. When we did Cinderella, the kids had to pause on stage for the audience to catch up. It was just non-stop laughter.”

It also is non-stop fun for the children, many of whom have grown up to appear in their high school productions. Ilski counts eight former students in St. Charles Catholic’s spring production of High School Musical this week.

“It makes me proud,” she said. “My goal is just to boost their confidence.”

Dani Aucoin, 12, portrays the Golden Goose in this week’s production.

She also likes that it’s not just the same boring old story.

Sophia Mason portrays Miss Cowmoo, whom she describes as the “chilliest cow ever,” even though she also is lactose intolerant.

“Miss Cowmoo is this cow that just pops out anywhere,” she said. “I just chill.”

St. Peter’s production of Jacques and the Sugarcane Stalk will be held at 7 p.m. April 8 and at 2 p.m. April 9 in the school auditorium.

Michel: World of possibilities opened through power of prayer

Did you hear the story about the man who began construction of a new bar? A local church began to... read more