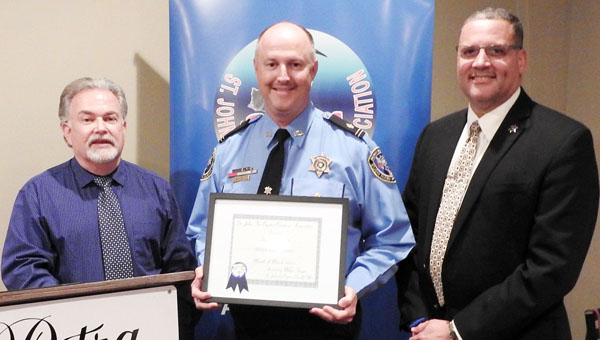 LAPLACE — Major John Gonor of the St. John Parish Sheriff’s Office was recognized as Officer of the Month by the St. John Business Association Wednesday during the group’s meeting at Petra’s in LaPlace.

Gonor was honored for his outstanding dedication and service to the SJSO and the community for more than 30 years.

He joined the Sheriff’s Office in November 1985 as a patrol deputy. Over the years, he was promoted to sergeant, lieutenant, captain and major while serving in the Patrol Division.

He also worked in the Narcotics and Criminal Investigation Divisions. In 2012, Gonor was transferred to his current position as commander of Human Resources.

“(Major Gonor) … does an excellent job of vetting potential candidates to come and work at the St. John Sheriff’s Office,” Sheriff Mike Tregre said. “In layman’s terms … you might win the Superbowl, but somebody is out there picking the talent to put the team together … that person picking my people and putting that team together for me is Major John Gonor.”