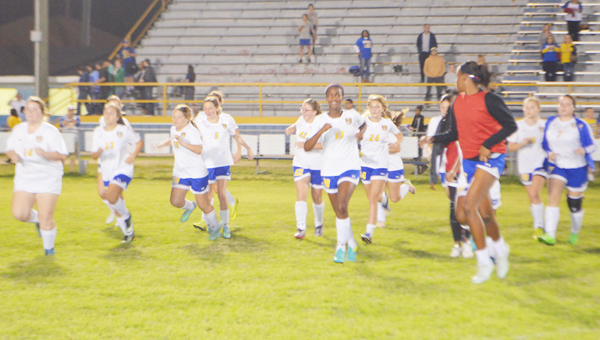 LAPLACE — It’s definitely been a long season, according to Travis Trepagnier, and the St. Charles Catholic coach wouldn’t have it any other way.

The Lady Comets head man is happy there are more games to play after his squad won in convincing fashion, 2-0, Monday evening over Holy Savior Menard.

Sophomore Eden Simoneaux, No. 3, looks across the field during playoff action.

“We still have to prepare, because we’re going to be playing a tough game,” Trepagnier said. “The two playoffs games we have played so far have been tough, and I don’t see this one being any different. We have to get ready. Home or not, Country Day doesn’t care. They are going to come in here and they want to win. We have to be ready.”

Trepagnier said this has proven the year his players “finally understand, especially now that we’re in the semis,” that hard work pays off.

“They are continuing to see that, so every game we get through, they say, ‘oh man, we have to work harder,’” Trepagnier said. “It’s been really fantastic to see them come together and really play as a team. I’ve got a bunch of new girls, and the chemistry has grown with every game. That’s really all you can ask for.

“One of our goals was to get a home playoff game. For us to get three, it couldn’t be better. To host a semifinal match here, especially for our program and school, is phenomenal. We couldn’t be happier with the results we have gotten.”

Trepagnier was business-like when discussing the state of his team in the minutes following the squad’s quarterfinal victory over Menard.

It matched the Lady Comets’ performance on the field, one that featured two goals by freshman Anna Guidry and very little on-field celebrating.

“I wanted to stay level and show the other team respect,” Guidry said in the aftermath of her scoring outburst Monday.

“I had an opportunity to get a goal in the second half but I never thought about winning until the game was over.”

Both scores were tone setters for SCC, which dominated possession and shots on goal throughout the quarterfinal battle.

“You have to fight to the end, no matter what the score is,” Trepagnier said. “You want to keep the pressure on. Soccer is a wild game. You never know when it can turn. You don’t want to give the other team any chances. You don’t want to beat a team down, but you want them to know we’re still in there and not give them any windows.”

Trepagnier said SCC let up against Riverside Academy in the second round of the playoffs, an error, thankfully, that was not repeated a round later.

“We learned from that mistake and, hopefully, we can continue to grow in that aspect,” Trepagnier said. “(With this win,) we get to take it one game at a time. We always talk about, ‘we’ve got one more game here.’ We don’t talk about the championship. We have this game to play. This team is in our way.

“We have to worry about Country Day. We know they are a good team. It’s the semis. There is not much else you can learn, but we have to try our best.”