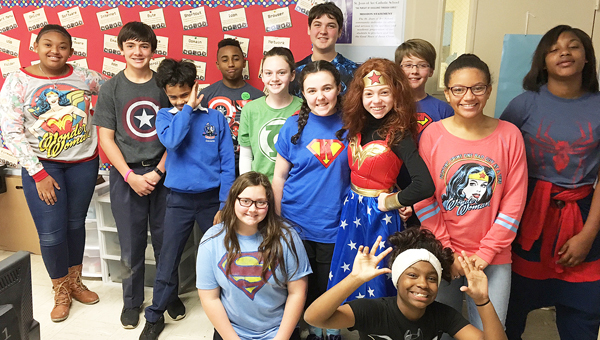 LAPLACE — While not in school presently, no one can accuse seventh grader Kamryn Scales of taking a day off.

The St. Joan of Arc Catholic School star pupil was diagnosed with aplastic anemia in November and has been unable to return to school due to her compromised immune system.

That didn’t stop Kamryn from earning a straight A average for the second quarter after school officials said she completed her course work from home and remotely from MD Anderson in Houston.

Kamryn’s father said she is doing OK “mentally and spiritually” at MD Anderson as she continues to go through the regimen prescribed for her recovery.
Because of Kamryn’s condition, they are many unforeseen circumstances that will determine her return to school, but Kamryn’s father said the family hopes for a return next academic year.

Principal Jeffrey Montz said Kamryn is a quiet, hard-working girl who is a wonderful example to others of Christian character and academic excellence.

“She is a well-rounded, conscientious student who is respected by both her teachers and peers,” Snowdy said. “We all miss her dearly.”

Kamryn keeps active in school activities through the use of FaceTime and a donated wireless router and Internet connection to the school, courtesy of RTC.

School officials have matched Kamryn’s hard work with continuous love and support, as well as   many fundraisers.

That part comes naturally to the faculty, according to Angelle DeLaneuville, Kamryn’s English language arts and math teacher, who described Kamryn as the kind of student that makes you remember why you became a teacher.

“She is hardworking, respectful and is a joy to teach,” DeLaneuville said. “I’ve been blessed to have had the privilege of watching her grow from a timid fifth grader to a self-confident young woman who will, no doubt, be a success in whatever endeavor she pursues.”

The school’s various fundraising efforts are dubbed “Kare for Kamryn.”

Donations that evening totaled approximately $2,300 and were aided by a $1,000 donation from the “Oldies but Goodies” social and dance club.

The donation was set up by Janet Sullivan, grandmother of Kamryn’s classmate, Lauren Weber.

Jeanne Loisel, Kamryn’s computer teacher and basketball coach, described Kamryn as a hard worker on and off the basketball court.

“She is kind-hearted and always positive,” Loisel said.

“She never lets the little things get her down. She is a great student.”

That attitude inspired the St. Joan of Arc Mission Club to make and sell bracelets, netting $338.69 to Kare for Kamryn.

The $130 collected was donated to Kamryn, as well.

Other events included a blood drive and “superhero” dress day on campus. The efforts of DeLaneuville, parents and students allowed 137 people to give blood out of the 150 people who showed up.

In addition, school officials said, $1,700 was raised to assist the family through the sale of hot pink — Kamryn’s favorite color — silicone bracelets that read “Kare for Kamryn.”

“She is a godsend,” Miller said.

School officials offered a “special thanks” to all local businesses that donated prizes for students who were able to get parents, relatives and friends to participate in the recent blood drive, including Raising Cane’s, La Caretta’s, Bailey’s Andouille, Quick Stop Car Wash, Winn Dixie, and Matherne’s.

LAPLACE — With a presidential priority calling for the deepening of the Mississippi River, Port of South Louisiana Executive Director... read more