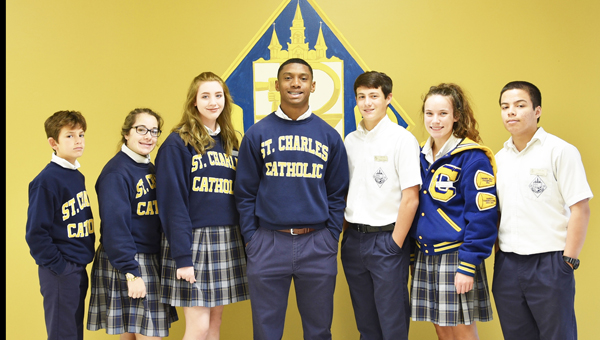 LAPLACE — In their Catholicity essays, St. Charles Catholic High School students relate their curriculum to their faith in every course they take.

On his first quarter English exam Catholicity essay reflection, senior Devin Dumas wrote, “when I accomplish anything, such as a good play on the field or a successful piano performance, I don’t boast or brag but instead thank God for giving me the ability to complete the task.”

Sloane Schweizer, in her essay, wrote “(God) created the beings who created science, math, art and everything else.”

According to Triche, “Sloane’s essay demonstrates the importance of religious reflection as part of the school’s curriculum.”

St. Charles Catholic High School leaders said they strive for faith development in all of the students.

Junior Michael Clesi wrote,  “The Catholic God gave his grace to all of us, and loves all, even sinners and non-believers.”

Nothing is too unimportant that it cannot also be a lesson in faith.

Jake Vicknair wrote about how learning about commas and conjunctions can also be a lesson that helps each of us get closer to God.

“But after Jesus (the comma) came, God and man were closer; however, in order for the relationship to be completed, the Holy Spirit (the conjunction) needed to be sent to establish an irreversible connection,” he wrote.

After reflecting upon his faith as he read The Lady, or the Tiger? by Frank Stockton, Keyon Harvey wrote “I am not angry at God anymore. I believe that everything happens for a reason.”

He related the story to a significant event that took place in his life. The lesson is God is always with us no matter what challenges life holds for us. There are many places in our culture that mirrors our faith. Mark Hodges gave an example with the following quote from his essay: “It can also be said that the Apostle’s Creed is like an university’s alma mater. Both specify one’s beliefs and what they strive to do.”

It is important to learn to measure our culture according to the Gospel and the tenets of our faith.

Kelsey Villeret and Amy Capdeboscq use inspiration from math class to inspire others to persevere in the daily struggles of life.

Villeret wrote, “Despite our mistakes, the answer is still there, waiting to be found.”

Capdeboscq concluded, “In conclusion, all students should work as hard as Job worked, and when they get things wrong, to persevere and learn from it.”

Villeret also uses the wisdom of physical science class to help others see how we let adversity affect each of us is a choice that we can make in faith.

“An event that weakens one person can make another stronger,” Villeret said. “The chemical and physical changes discussed in the lab apply to people as well. It is the individual’s choice of how they let the event affect them.

Family builds on homegrown safety John Frederic installed his first alarm system in 1972 when he was asked to secure... read more