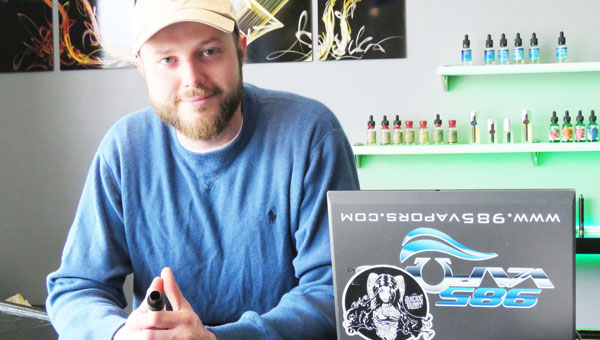 Clayton Lacinak, general manager of 985 Vapors in LaPlace, can explain the vaping science and demonstrate the various devices. (Lori Lyons/L’OBSERVATEUR)

LAPLACE  — While everyone knows there are bars, coffee bars and a brand new frozen yogurt bar in LaPlace, some folks know where there is a really cool juice bar.

It’s not your normal kind, though.

As more and more people come to recognize the dangers of smoking, some have turned to vaping — the inhalation of water vapor through a hand-held device.

The year-old vape specialty store in LaPlace offers the latest models of vaporizers, plus a wide variety of flavored juices and a pool table for customers to use when they want to hang out.

Juice is the wide assortment of flavors inserted into the hand-held vaporizer and can include everything from banana moon pie to peaches and cream to whiskey.

In LaPlace, 985 Vapors is the go-to spot for all those flavored juices, as well as vaporizers, mods, e-cigarettes and almost everything in between, with a large inventory of popular brands.

Opened by Christian Cornejo and Craig Jacomine a little over a year ago, 985 Vapors offers a comfortable spot to hang out, shoot the breeze (and some pool) and blow some vapor with general manager Clayton Lacinak behind the bar.

“I say it’s got a man cave feel,” Lacinak said.

“We want our customers to be comfortable and feel at home here. They’re like a family to us. I’ll talk to them about anything, from football to Grey’s Anatomy.”

For the expert, Lacinak or his co-workers can demonstrate the latest models, including some hand-crafted models.

For the novice, Lacinak can explain the art of vaping as well as the technology behind the devices.

Vaping first came into being sometime in the 1960s but there certainly were no hand-held devices.

It really blew up (pardon the pun) in the early 2000s once the hand-held device was invented and as more people began turning away from cigarettes due to science, laws and regulations.

Today’s vaporizers are as small as a lighter or as large as a TV remote, with several alternatives in between. They can cost anywhere from $20 to more than $300.

One customer to 985 Vapors was looking for a replacement for his, which fit perfectly in his front shirt pencil pocket.

While the dangers of vaping are still being studied and debated, those who do it are convinced it’s a better alternative.

Lacinak has read the research and can explain it all.

Legally, however, Lacinak can’t say vaping is safer or better for you than smoking.

He can just tell you how going from a smoker to a vaper changed his own life.

“In my personal experience, I can run again. I can work out again,” Lacinak said.

“I would use smoking as a stress release. Tensions are high, I’m smoking a cigarette. But then the costs outweighed the benefit of smoking to me. I did the math. Then I did the math on how much I was smoking.

“Smoking about a pack and a half of American Spirits a day meant I was spending about six to eight hours a day smoking. I didn’t like that idea.”

Eddie Ferrand of Slidell, who stopped by 985 Vapors for some of his favorite juice on his way to work in Norco, said he was a cigarette smoker until about 10 months ago.

“I smoked a pack and a half a day,” Ferrand said.

“When I started vaping, I’d smoke a pack every couple of days. Then I had a pack last me a whole week. Then I just quit buying them.

“I know this, I go to this one (vaping) place where there are some stairs. I used to have to stop halfway up those stairs for a little rest. I went the other day and I said, ‘Man, I don’t have to stop and rest anymore.’”

Added Lacinak: “The way I look at it, it’s a way to quit smoking without having to actually suffer.

“Vaping has been the alternative, a different way to achieve the same thing.”

I have one gift under my tree. One. And I just ordered two more bringing the grand total to three.... read more