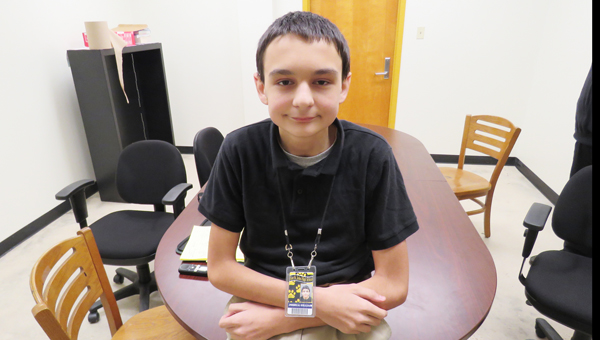 Ask Gilliam about math and science, however, and the youngster becomes downright talkative.

“Math and science, they basically help me figure out everything about the world,” Gilliam said. “They show me why stuff is the way it is, how it can end up helping in the world.”

Knowledge is power, Gilliam says. It also helps you get good test scores.

Gilliam, 16, is one of a handful of East St. John students who earned a perfect score of 800 on last year’s end of course exams, in biology.

“It felt really great,” he said. “I was really happy. My teacher told another teacher he had never seen a student get a perfect score on a biology EOC exam, so that felt great too.”

Gilliam also did pretty well on all the other tests.

“I don’t remember my exact scores,” he said. “I did really well. It’s just great that I’m making sure that I can achieve well.”

Gilliam, who also likes reading history and science fiction books, computers and playing video games, said he hopes to use his knowledge to help the rest of the world one day.

“I’m planning on becoming a computer engineer,” he said. “I think maybe I’ll go into programming. I really just want to help people when I grow up.”

“Josh is a kid that, you see the work he does in the classroom, but you never have to remind him of what his goal is in school,” Simon said. “He’s very intrinsically motivated to do well in school and, subsequently, we know he will do well at life. He is what you look for when you say you want a model student who is going to come to school and have that self-determination to complete that goal.”

Added Bradley: “He is one of a kind.”

Gilliam, the son of  William and Jennifer Sweezey of LaPlace, said he always has done well in school and he takes his studies very seriously.

He also is smart enough to know there are lessons to be learned outside of the classroom.

“Schoolwork can only get you so far, you know,” Gilliam said. “It can help you get a job easier and help you figure out how to do stuff easier, but actual work and figuring out how to survive at life is a lot harder than figuring out a bunch of math and science things. Things like paying taxes or paying mortgages, figuring out what you’d like to do at life, going on interviews for a job, there’s a lot of stuff that’s not taught at school. That’s stuff you need to end up learning too.”