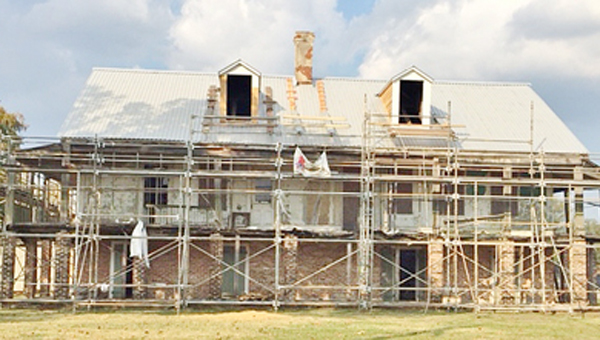 The house was placed on the National Register of Historic Places in 1994.

RESERVE — The Godchaux-Reserve House Historical Society will hold a ceremony celebrating the completion of the roof and stabilization of the decrepit home that was once a hub of the St. John the Baptist Parish’s 18th century sugar industry.

The ceremony will be held at 10 a.m. Nov. 30 on the grounds of the Godchaux House, 1628 River Road in Reserve. Tours of the home will be available. River Parish Maintenance in Reserve is sponsoring the ceremony.

The society began reviving its efforts last year to restore the home that historians estimate was built approximately in 1764 by European settler Jean Baptiste Laubel and placed on the National Register of Historic Places in 1994. The home has become worn from weather, age and neglect over the years.

Stephen Guidry, president of the historical society, said the group hopes to repair the house with private donations and grants.

The home and surrounding property were the central point of activity for a community of about 100 homes built by the Leon Godchaux family in the early 1900s to house employees of the Godchaux sugar refinery, which was sold in 1956. It is noteworthy, Guidry said, that when Godchaux purchased the property he freed all of the slaves.

The house was moved from its original site, now the Globalplex cargo complex, in 1993 to make way for the Port of South Louisiana’s expansion plans. Its current site is at the corner of West 10th Street and River Road.

In 2001 and again in 2009 St. John Parish made a push to renovate the house, applying for grants from the Louisiana Department of Transportation and Development and the Louisiana Recovery Authority. Financing, however, was denied.

The historical society reorganized last year to begin another effort to restore the house. Plans are to rebuild the house to serve as a visitor center, museum and a facility for catered events for use by businesses, industries and people in the community, Guidry said.

The museum will trace the history of the sugar industry in general, and the Reserve plantation and its individual families, in particular, Guidry said.

According to local legend, the house gave the community of Reserve its name when Godchaux called it “Godchaux’s Reserve.”

In addition to Godchaux’s legacy, Guidry said, it is significant that African Americans once owned the house in the antebellum era. Free people of color Jean Baptiste Fleming and Jeanette Teinter and brothers Francois and Elisee Rillieux were among the owners.

The Rillieux brothers also were cousins to African American inventor Norbert Rillieux, who created the multiple effect vacuum process that revolutionized the processing of sugar cane still being used around the world today.

The society also is in the process of planning a fundraiser and designing T-shirt and tote bags to sell; and the board is working with Tulane’s historical preservation program to help in the restoration.

Museum exhibits will showcase Francois and Elisee Rillieux; Women of Louisiana, focusing on Antoine Boudousquie’s widow, Sophie, who struggled to maintain the plantation and raise a family during the Civil War; Leon Godchaux, a Jewish immigrant who bought the plantation in 1869, bringing it out of bankruptcy and opening a sugar refinery on the site in 1915; Free People of Color, highlighting their technological and economic contributions to antebellum Louisiana; Jewish Immigrants in the River Region, highlighting Jewish social and cultural influences and their contributions to the community; History of the Sugar Cane Industry, focusing on documentation of the history of the sugar cane industry from growing to refining to marketing; and the Mississippi River as a Transportation Corridor, highlighting the men, women and machines that played a crucial role in shaping the economy of the River Region.