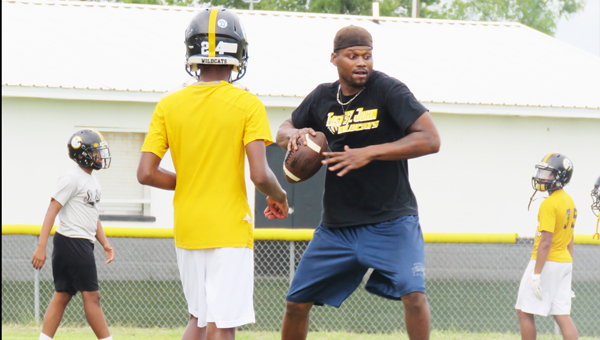 After entering the season as the top-ranked quarterback in the country, he had lived up to the hype and earned the title.

In his senior season as an East St. John High Wildcat, Perrilloux passed for 3,556 yards and 31 touchdowns and rushed for another 1,434 yards and 35 more scores. That gave the senior from LaPlace 5,006 yards of offense — the highest single season total by a high school player in Louisiana football history. Now it’s 12 years later and they’re calling Ryan Perrilloux “Coach.”

After two seasons at LSU, two seasons at Jacksonville State and nine years as a professional football player in various leagues throughout the world, he has come home.

Perrilloux, now 29, is back at East St. John in Reserve, this time as the quarterbacks coach for the Wildcats and, beginning next week, a business teacher.

“This is home, this is base,” he said. “I’m not getting any younger so I’m just basically trying to start a new career. Football is everything I love to do. It’s all I really want to do. I got to come back here to my alma mater to give back to the kids from my area and give them a lot of the insights of things around the game that they can look forward to when they get out of school.”

East St. John coach Aldon Foster, starting his second season as coach of the Wildcats, welcomed Perrilloux to the staff.

“He’s a great guy, a great role model for these kids,” Foster said. “He can tell them all what to do and what not to do. He lived it.”

He is certainly one of the River Parishes’ most famous athletes, who still can’t get through a trip to the grocery store without being stopped by someone who remembers his heroics on the field. Even his players are  a little awestruck in his presence.

“I means a lot to me,” he said. “It means I’ve done something in my life that really meant a lot to the people of this parish, this state.”

Some of those memories are good; some are not so good. His highlights and low-lights are a matter of record: his stellar but all too brief career at LSU where he was the MVP of the 2007 SEC Championship game against Tennessee, his suspension in 2008, then his redemption at Jacksonville State, where he was the Ohio Valley Conference Player of the Year.

From there he has strung together nine seasons as a professional football player. He  spent two seasons with the New York Giants, earning a Super Bowl ring as a member of the practice squad. He has played in the United Football League, Canadian Football League, Arena Football League and, most recently, spent a season in France playing for the Aix-en-Provence Argonauts of the American Football International League.

“I can say ‘bonjour,’” he joked. “That’s about it. Overall, it was just a good experience to play some football. It’s old-fashioned American football, 11 on 11, just back outdoors. I had an opportunity to work with some good guys.”

In between the sports accolades, however, there were the stories off the sports pages — investigations, arrests, suspensions, questions about his character.

“I could have been a more responsible young man, especially at LSU,” he said. “I never was a bad kid, that’s why they still treat me the way they treat me there now. They still welcome me. It never was personal. It was just all about doing the right thing. That’s what I teach my kids here.

“I’m a walking example. They see how hard it is for me. It wouldn’t have been as hard if I had just come out and done it the right way. How to throw a football is the last thing I’m trying to teach them.”

He still can do that, though. Besides the life lessons, Perrilloux has spent his life learning the game from some of the best coaches and players in the game. He is a serious student, too, filling notebooks with diagrams of plays.

“I’ve been around all kinds of different systems,” he said. “I’m an X’s and O’s coach. I know the game. I understand the game. I’ve played at the highest level. I’ve been around some of the greats. That prepared me for what I need to teach these kids as far as defenses and concepts. I want to get them smarter.”

Once a starter at Destrehan, this will be his first full season at East St. John after sitting out part of last year while awaiting a ruling on his eligibility.

“He’s solid,” Perrilloux said. “He’s a big kid with a big arm. He’s a smart kid. He picks things up quick and that’s what’s going to help him in his career. “

“We go over everything,” Darensbourg said. “Footwork, the fundamentals of playing quarterback, coverages, how to actually throw the football, leadership. I tell him I’m going to break his records.”