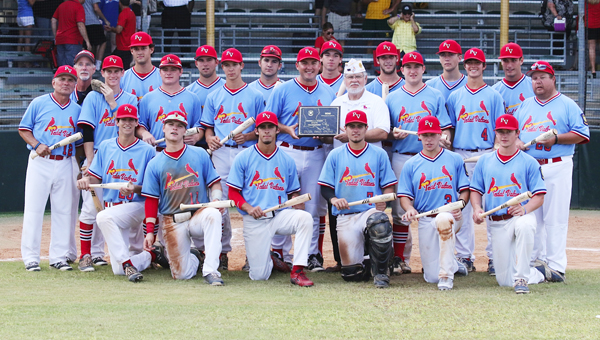 Pedal Valves, the American Legion baseball team made up of players from around the metro area, including players from Riverside Academy and St. Charles Catholic, won the state title Thursday. They beat Holy Cross-based Ponstein's, 3-0, to advance to the Mid-South Regional. (Photo courtesy of Dawn Wild)

Anxious, worried, queasy, the man had to force himself to eat lunch then had to fight to keep it down.

Pitcher Mason Vicknair threw a 9-inning 4-hitter, while striking out 11 and walking one to lead Pedal Valves to the American Legion State Championship. (Photo courtesy of Chadna Gauthier)

He need not have worried so much. The Cardinals simply went out and played like they have all summer.

The team advances to the American Legion Mid-South Regional in Little Rock, Ark. The Cardinals, now 29-6, will play the Missouri state champion at 9:30 a.m. Wednesday in another double-elimination tournament of 9-inning games. Teams from Arkansas, Kansas, Mississippi, Oklahoma and Texas also are in the tournament. The winner advances to the World Series, which begins Aug. 11 in Shelby, N.C.

Vicknair, a rising senior who was the Class 2A All-State Player of the Year, pitched a complete game shutout, allowing four hits, walking one and striking out 11. He had a no-hitter though the fifth.

He also had one of the Cardinals’ three hits, a double off of Ponstein’s pitcher Brandon Taravella, in the ninth and scored a run.

“He was outstanding,” Riehm said. “He was like a big-time pitcher. He just got better and better as the game went on. He was truly a man amongst boys out there.”

The other two Cardinals hits came from Tyler Gauthier, a Delgado signee. He scored the first run of the game in the top of the sixth to break the stalemate and stole two bases in the eighth. He stole five bases in the game.

“He seemed to be the only one who could figure out Taravella, who had a little bit of a side-arm,” Riehm said. “He was changing speeds on us, and we just couldn’t get to him.”

“I guess cause I’m a lefty, I could see where he was coming from,” Gauthier said.

As for his base-stealing prowess on the day, Gauthier said: “Speed kills.”

About the only thing the team didn’t perfect was its post-game dogpile, with only about a third of the players participating. They did manage to give Riehm the traditional ice water bath.

This was the first summer Riehm had been able to mingle a team of players from a bunch of schools in the New Orleans area, including several from Riverside and St. Charles Catholic, into one American Legion team.

While their work is not done, Riehm said it has been an amazing experience.

“I knew we would be good,” he said. “I never thought we’d play like we have, though. It’s like they’ve been playing together their whole lives.”

NEW ORLEANS — A lot of baseball fans thought the Pedal Valves Cardinals would be the team to beat in... read more