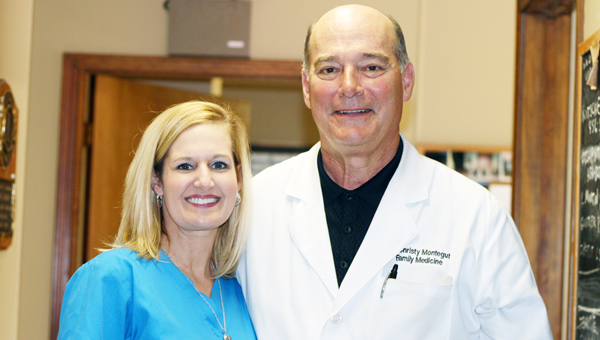 LAPLACE — With the amount of devoted patients he has, medical assistant Stephanie Cosse believes Dr. Christy Montegut deserves to be highlighted today in honor of National Doctor’s Day.

Cosse has been with Montegut and his practice, The Family Doctor Clinic of LaPlace, since 1997.

“Dr. Christy Montegut is very easy to work with,” Cosse said. “His patients will never leave him; they are very loyal. There is just something about the way he cares for his patients. He has been doing this for 30-something years and he is old school. His patients trust him. If he is out for a day or two, they will wait until he is back to see him.”

Cosse feels Doctor’s Day is a great way to give thanks to all doctors for what they do for those needing medical attention.

Montegut, a family physician, finished medical school in 1977 and has been in practice in LaPlace for more than 35 years.

When he was a child, Montegut said he admired the work his doctor did. With encouragement from his grandfather, Montegut decided to follow his dream to go to medical school.

Being a family physician, Montegut said he deals with everyone from children to the elderly, covering “the entire family unit.”

On a normal day, Montegut said he sees approximately 30 patients. The practice as a whole, which includes three other physicians, might see 70 to 80 patients a day.

“Here, we treat a lot of chronic illness,” Montegut said. “We deal with blood pressure, heart trouble, diabetes and orthopedics problems. For someone under the age of 40, they should go to the doctor every two or three years. For someone who is 50, they might want to go yearly.”

For individuals, children as well as adults, dealing with what some call white coat syndrome, Montegut finds if you distract the patient or talk to them it makes things go a lot smoother.

“Young children may be afraid of the doctor, and there are little tricks you learn over the years,” Montegut said. “It’s important to make the child feel at ease. Sometimes you need to work with the parent to help them get over their fears. With adults, you can sometimes tell they are nervous when you check their vital signs and their pulse is rapid or blood pressure is high. You just learn how to read body language and start a conversation to distract them.”

The best part about being a family physician, Montegut said, is the satisfaction he gets through providing treatment to those needing assistance, whether it’s getting over a sore throat or beating cancer.

“It’s the satisfaction of doing the job you are trained to do, with the knowledge and experience you have and actually put it to use,” Montegut said. “It’s nice when you see someone who was really sick recover and get back to normal. It makes me feel good inside knowing that I was able to help them.”

While Montegut deals with his living patients, he also handles dead ones, as he is the St. John the Baptist Parish coroner. One of the hardest parts of being a coroner is dealing with the death of a child or young person by unexpected or tragic causes.

“It’s hard to see young people’s lives cut so short,” he said. “Then you have to break the news to the family. That’s really hard.”

Montegut has been coroner, which is an elected position, for 28 years.

“It’s not something we’re trained to do in medical school,” he said. “It was something I had an interest in. It involves investigating the circumstances of death. I take care of situations like homicides, suicides, car crashes and infant deaths. I see about 80 to 90 percent of the deaths in the parish.”

After all his years of providing medical care, having a special day to honor doctors means a lot to Montegut.

“To me it’s a day set aside to appreciate doctors and what they do,” he said. “It’s a day of pride for me. It’s nice that we are recognized. Being a doctor is a 24-hour-a-day job, seven days a week. I think we do a really good job in this country providing health care to people.”