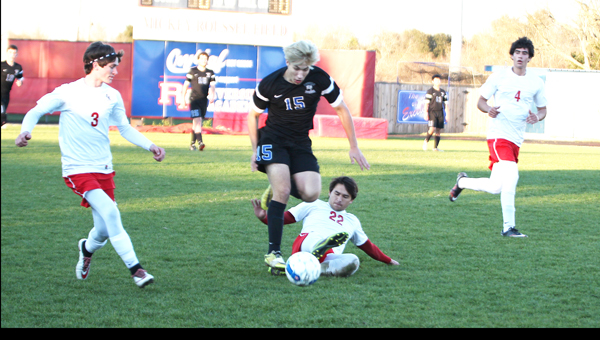 Riverside’s Elliot Veron, No. 22, makes a play on the ball during the Rebels’ 3-1 first round playoff victory last week over Runnels. Dane Edler. No. 3, and No. 4 Ryan Roussel of Riverside are shown in pursuit. (Chadna Gauthier/SUBMITTED)

RESERVE — St. John the Baptist Parish was well-represented in this year’s Division IV soccer playoff brackets as Riverside Academy and St. Charles Catholic sent their boys and girls teams into the first round of action last week.

Three of the four made it to today’s second round.

The No. 14 seed Riverside boys followed Friday with a 3-1 win over No. 19 Runnels in overtime. They will play No. 3 seed Episcopal School of Acadiana at 2 p.m. today, also in Lafayette.

The St. Charles Catholic boys defeated No. 16 Pope John Paul II, 2-1, Friday to advance to the second round. The No. 17 seed Comets play at 5 p.m. today at No. 1 seed Catholic of New Iberia.

All four teams have made great strides in their soccer history.

The Riverside boys team (10-5-2) had never hosted nor won a playoff game until last year. The squad did both again last week, but needed overtime to do it.

After finishing in a 1-1 tie at the end of regulation, the teams played two 10-minute periods of overtime. Payton LaFountain scored with about eight minutes left in the first overtime to put the Rebels ahead.

“As a head coach, you can’t ask for anything more,” said second year coach Jonathan Reed. “We’ve got a good team. We have good chemistry.”

Riverside’s girls jumped into the playoffs a day earlier, earning only their second playoff victory in school history. They did it with a ferocious onslaught of shots-on-goal, too many of which missed the mark, said coach Mert Deger.

“We should have had a lot more,” he said. “It should have been over long before. We just kept missing chances. I guess we were just too anxious to score. We’ve been like that almost every game. We create chances, we just don’t put the ball in the net.”

Duhon would add another goal in the second half. Cheyenne Badeaux, Toni Perrin and Taylor Aubert also scored second-half goals.

St. Charles’ boys got to the quarterfinals last year for the first time since 2008.

On Thursday they got to the second round with a 2-1 win over Pope John Paul II. Luke Perret and Lamy Guidry scored for the Comets (7-8-2).

Their reward is a match on the road against the No. 1 seed, which has made it to the quarterfinals the last four years.

St. Charles’ girls had not made the playoffs since 2013 and struggled at times this season. The Lady Comets (7-13-2) were shutout by Opelousas Catholic on Thursday, 1-0.

DHS pulls out win over ESJ