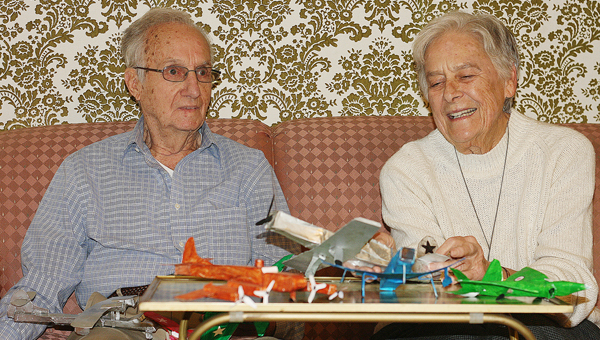 Leslie Vicknair, left, sits on the couch with family friend Sister Joel Grubler Friday afternoon. Even though Grubler has moved away, she still visits every few months for lunch and also picks up and drops off planes she has painted.

RESERVE — When Leslie Vicknair was in the second grade he learned how to make paper airplanes.

A few years ago the 85-year-old Reserve resident took up the craft again by making World Word II planes.

Leslie Vicknair said he first learned how to make
paper planes in the second grade. Even though he has never flown a plane, the Korean War Veteran enjoys creating them out of paper and cardboard.

“I get a piece of paper and draw a plan,” Vicknair said. “This way I can cut it out, put it together and see what it looks like. Once I do that, I draw it out on cardboard and place it all together.”

Vicknair has an old family friend, Sister Joel Grubler, paint the planes for him. The two met years ago when Grubler was the principal at St. Peter’s School in Reserve, where Vicknair’s children attended.

Even though Grubler has moved, she still visits Vicknair every few months to go to lunch and receive the planes.

“When he started making the airplanes, he had maybe five or six of them, and I said ‘You know, they would look much better painted,’” Grubler said. “I told him to let me take them home and paint them for him. Every time I go visit, I bring a few and pick some up. It only takes me a few minutes to paint, some I just spray silver. I mostly paint little stars. I don’t know if the real ones even had stars on them. I just do it to decorate them.”

Vicknair also made a truck and tank that Grubler painted.

“Its just unbelievable,” she said. “At his age, I’m amazed he remembers all of the names of the planes. It’s remarkable. The planes are so well done.”

Vicknair has 15 planes on display at his home.

Even though he has never flown a plane, the Korean War Army Veteran really enjoys making them.

Vicknair, who said he only has vision in one eye, said he as magnified glasses if he needs to see the planes up close.

Vicknair first started making the planes for fun, but later made them for his granddaughter.

“She is a speech therapist,” Vicknair said. “She works with children, and I showed her one day how I made the planes. She asked me if I could make some so she could give them to the patients.”

The ones he gives to his granddaughter are made of paper and take Vicknair about 10 to 15 minutes. However, the cardboard ones he keeps take longer to make. Vicknair said it could take him a few days to complete the cardboard models.

Vicknair’s favorite plane since he was a child is the P-38, and there are a few of those in his collection.

“I liked it from the first time I saw it when I was young,” he said. “I decided I wanted to try and make it.”

While Vicknair admits he uses a book for the jets in his collection, most of the planes he has done come from memory. 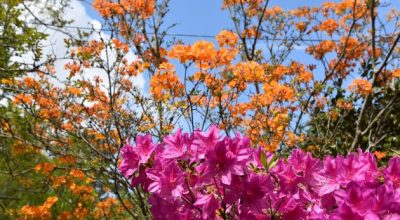 Photo Feature: 100 is the new kindergarten