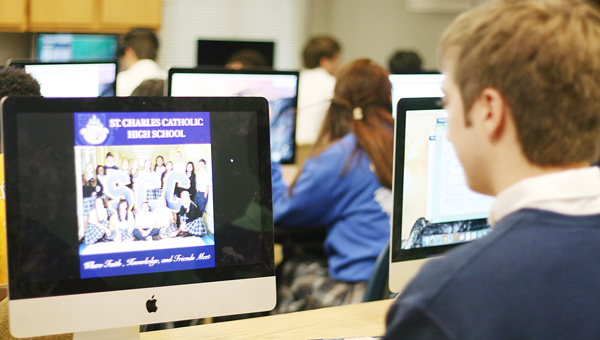 Christopher Wilcut’s interest in multimedia expanded during his junior year when he took digital design.

LAPLACE — Christopher Wilcut, a senior at St. Charles Catholic High School, is using his Photoshop and multimedia skills to show the community what the school has to offer.

One way Wilcut used his skills was helping put together a school booklet for those attending St. Charles Catholic’s open house.

Director of Instruction and Institution Advancement Dr. Courtney Millet said the book is updated every year with new photos and layout, and Wilcut was one of the students that helped put the whole thing together.

“He was great to work with,” Millet said. “He gave up a lot of his personal time to put the book together. We were on a tight time line, and he did a super job, really good to work with. Christopher did the front and back cover; the back cover is a lot different from what we normally do. It came out really nice, and we are proud it was done by our students.”

The full color booklet features facts about the school, remarks from graduates as to why they chose St. Charles Catholic, a list of the courses offered, clubs and more. There is even a photo of Wilcut in the booklet sitting at a computer working on a photo for another project.

Wilcut also uses his skills to work on the St. Charles Catholic website.

“There aren’t many students that have access to update our website,” Millet said. “Out of almost 500 students, only seven have access, and he is one of them. Students with access have to be students that we trust and are able to handle the responsibility.”

Through his multimedia class Wilcut helps edit the website, edit photos and upload them to the site, write all releases for athletics and also for upcoming events.

“We keep it updated so everyone knows what’s going on at St. Charles,” he said.

While Wilcut now has a wide rage of skills when it comes to graphics and multimedia, those subjects were almost foreign to him a shot time ago.

“Last year I needed a filler class to fill out my schedule,” he said. “Someone told me to do digital design, and I was really nervous about it because I was really not good with computers or digital design. The teacher taught us a lot, she did a great job and I really enjoyed it. So I decided to take multimedia this year.”

Along with graphics skills, Wilcut is also influencing the lives of others by being a member of the school retreat team.

“I was really nervous about joining because I’m not exactly an outgoing person,” Wilcut said. “My friends were joining so I decided it would be a good idea to join. I’ve had a lot of fun with it so far. It’s helped me open up a lot. We go around to the local feeder grades and we play fun games with them, sing and talk to them. Basically, we help them out as they transition to high school and we incorporate religious aspects into that.”

Wilcut said he knows he makes a difference in the lives of the younger students from their comments.

“It really hit me one time when I was giving a talk,” he said. “A kid came up to me and said ‘thank you, I really needed that.’ I thought, ‘Wow, I did something important,’ and it really felt good.”

Like any good student, education is important to Wilcut, who said his grades have improved since he moved to the area last year. He is in dual enrollment classes for Southeastern Louisiana University.

“Education furthers our abilities to progress in life,” he said. “By having a great education, we have that step up from our other peers in life because jobs are becoming much more competitive. We need that slight edge to stay ahead of the back.”

The senior is also one of the newest members of the St. Charles Catholic 30 plus club that features students who score at least a 30 on their ACT. Wilcut said it’s an honor to be part of the club.