All Signed Up: Area players declare their college choices 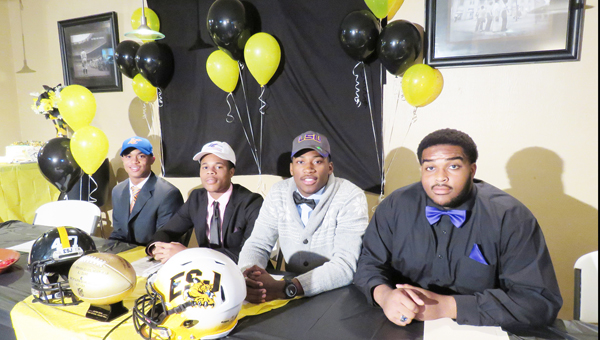 Such is the phenomenon that has become National Signing Day, the first day high school athletes may officially accept their best offer to play their best sport at the next level with a simple signature on a national letter of intent.

In St. John the Baptist Parish, there was cake, catfish and, perhaps one case of cold feet.

On Tuesday, East St. John’s Da’Monte Coxie, one of the top receivers in the state, had a last-minute change of heart and decommitted from LSU. On Wednesday morning, he took it back and recommitted to the Tigers. Although Coxie did not officially sign papers during the ceremony, he said he would soon, after taking care of an “academic issue.”

“I talked to the coaches and, they’re committed to me and I’m committed to them,” he said. “It was just an emotional time. I didn’t know exactly how to handle it. Talking back and forth with the coaches, I realized that that’s the school I really want to go to.”

St. Charles Catholic kicked off Wednesday’s festivities with a small ceremony in the upstairs meeting room at the CometPlex, complete with king cake. Moms, dads, grandparents, aunts, uncles and siblings crowded in to watch four football players and one softball player push aside the balloons to sign their official documents.

“It’s good to see kids come out of your program and actually want to go on and extend their career a little bit further,” St. Charles football coach Frank Monica said. “It’s a great game. And, more importantly, mom and dad get a raise whenever they sign a scholarship. You want them to walk away with an education. I think that’s the most important thing that we have for them is that. You can’t play football forever. But one thing they can do is get an education. I think everybody should go to college. It expands their world. They find out there’s more to life than just LaPlace.”

Wide receiver Jabari Walters, the son of Rams coach Brandon Walters, will be attending Tulane University and intends to walk on the football team.

“It’s finally all coming together and I’m glad it’s over with,” Veron said. “It’s a new chapter in my life and I’m ready to get it started.”

Perhaps no one was more emotional than Alton Webb Sr., the father of East St. John’s Alton Jr., who is headed to Belhaven.

“I’m losing it really,” he said. “I’ve been waiting for this for 18 years. And I hope he goes further than just college.”

Signing on the dotted lines in the River Parishes…