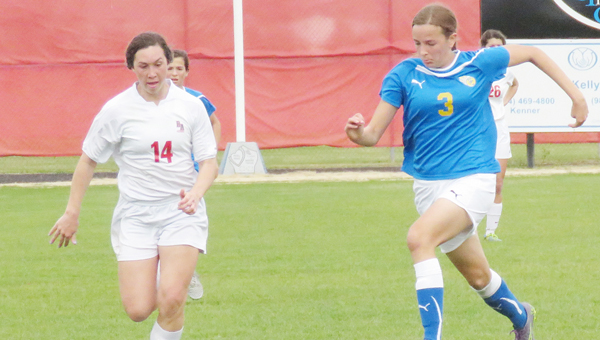 RA’s Toni Perrin, No. 14, looks to gain possession of the ball while SCC’s Eden Simoneaux zeros in. Simoneaux closed out Saturday’s scoring with a goal.

RESERVE — There was no winner in Saturday’s District 6-IV girls soccer match between Riverside Academy and St. Charles Catholic.

There were no losers, either.

After 80 minutes of regulation play, the Lady Rebels and the Lady Comets played their rivalry out before an appreciative crowd only to end in a 2-2 tie. There would be no tiebreakers, no overtime, no penalty kicks.

There was no point.

Riverside Academy will be recorded as the District 6-IV champion with a record of 5-0-1. The Lady Rebels (12-2-3 overall) kept their district slate unmarred by a loss and get to claim the season as one of the best in school history.

They entered last week as the No. 10 team in the Division IV power ratings and are assured a spot in the playoffs to begin Thursday.

St. Charles Catholic (6-11-2) was ranked No. 24 and should make the cut, as well. But for the Lady Comets, Saturday’s game was a giant leap forward for a young, burgeoning program.

Riverside had defeated the Comets 6-2 earlier this season and shut them out the last few times they played over the years. So coach Travis Trepagnier was pretty happy with Saturday’s outcome.

“It goes down as a tie in the books, but it’s a big win for our program,” Trepagnier said, pointing out that of his 11 starters, six are eighth graders or freshmen and the team played a Friday night game in New Orleans against McGee, which SCC lost 1-0.

“We are so happy with how far we’ve come — to see where we started and where we are now,” added assistant coach Mike Rollo.

That’s also how the Comets played on Saturday. Roughly 10 minutes into the morning match, Regan Dufforc scored the first goal of the game. It took Riverside’s Taylor Aubert about 10 minutes to answer and tie the game.

Riverside took a 2-1 lead in the second minute of the second half on a goal by Maddie Duhon. There the score remained until the final minutes.

After a flurry of attempts, St. Charles’ Eden Simoneaux sent a ball over the goalkeeper’s head and into the net to tie the game at 2. Both teams tried desperately to score a final goal, but neither was able.

Riverside coach Mert Deger said the tie did not tarnish his team’s season.

“It still is one of the better seasons we’ve had at Riverside,” Deger said. “We have the district championship. We kind of took this game lightly. They just wanted it more, I think.”