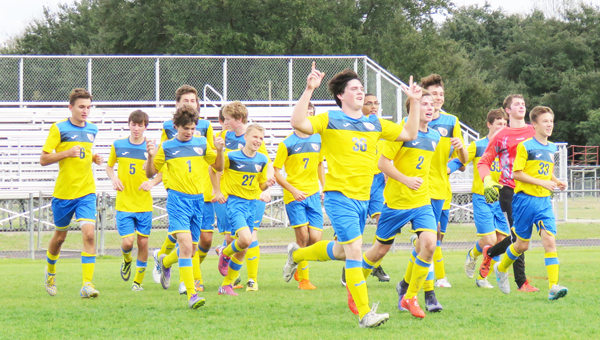 It had been nearly a decade since the St. Charles Catholic boys soccer team won a district championship.

To get one this year, all the Comets had to do was get past their nemesis — the Riverside Academy Rebels, a team that had already defeated St. Charles this season, 1-0, and was looking for its first district title ever.

Playing an aggressive offense that had the Rebels on their heels virtually all day, St. Charles took a 2-1 victory Saturday afternoon on Mickey Roussel Field at Riverside Academy.

Both teams finished with records of 5-1 in District 6-IV, but because of district bylaws and pre-game calculations, including the number of goals scored by each team in district play, Saturday’s victory gave the Comets (6-8-2) the outright district title.

Both teams are expected to make the playoffs, which begin later this week. Playoff pairings are due to be announced today.

As of last week, Riverside was No. 17 in the power rankings and St. Charles was No. 20.

Saturday’s win clinched St. Charles’ first district championship since 2008, when the team claimed its third in a row while playing in Division III.

Those Comets advanced to the quarterfinals.

This year’s Comets won the district championship with attack after attack on the Rebels’ goal, giving goalkeeper Evan Kenney plenty of opportunities to make saves.

In the 23rd minute, St. Charles senior Daniel Jaubert aimed a kick that bounced high just in front of the goal. Kenney’s jumping save attempt was just a tad too late, and the ball just crossed the plane for the goal.

“That’s all that matters,” Jaubert said of his quirky score. “It counted.”

Riverside tried to answer. In the 17th minute, Tyler Gauthier missed high on a penalty kick. In the same minute he managed to set up another shot right in front of the goal that missed wide.

The long-standing rivalry between the two teams showed a bit in the second half with one Riverside player drawing a red card and a St. Charles player getting a yellow.

The Comets kept up their relentless attack, and in the 65th minute of the match, Comets junior Andrew Rodrigue set up for a penalty kick and found a hole to put St. Charles ahead 2-0.

“I just found a spot I wanted to put it,” Rodrigue said.

Riverside would not score until about 10 minutes remained, when senior Shane Boudreaux got a second chance after a penalty kick. From about 15 yards out, he found a hole just to the left of a diving St. Charles goalkeeper Matthew Templet.

Though tested in the final minutes, Templet let nothing get past him again. Comets coach Sean LeBlanc said his team, though young — there were three starting seniors on the field — was determined not to let Riverside get the best of them.

“They lost the first game and they weren’t going to let that happen again,” LeBlanc said. “Our young guys really have stepped up through the year.”

Riverside Academy coach Jonathan Reed was tasked with trying to remind his team that the season wasn’t over after Saturday’s loss.

“It hurts,” he told his players. “It hurts inside. But this isn’t the end. We still have something to play for.”

The Rebels (9-4-2) were on the verge of winning their first soccer title in school history on Saturday. Riverside didn’t even field a team until 2006. The Rebels even made the playoffs that season due to a lack of teams to fill out a bracket.

“It’s a bitter pill to swallow,” Reed said. “They just outplayed us. They showed up with a purpose.”