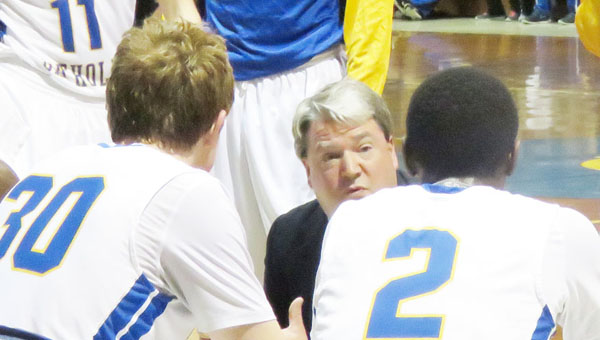 SCC coach Kemper Todd said his team’s 61-39 loss to Newman made for an unhappy homecoming.

The second year coach of the Comets spent four seasons as coach at the Uptown school. Tuesday night marked his first return with the Comets, who dropped down from Class 3A to 2A this season and rejoined the Greenies in district.

It didn’t quite go as Todd probably imagined.

Newman jumped on the Comets early and never let up on the way to a 61-39 victory. With sharp outside shooting and solid defense, the Greenies jumped to a quick 37-6 lead in the first half. Newman hit 13 3-pointers in the game while the Comets (12-12, 1-3) scored just one field goal in the first quarter and two in the first half.

“It was not the homecoming I was hoping for,” Todd said. “Newman played very well, and we did not. (I) had as tough a half as I have ever been a part of. Down 37-6 at the half, we came back with out heads held high and played a respectable second half.”

The Comets will host Riverside Academy on Tuesday.

After losing a non-district game to Karr on Jan. 20 and its first district game in forever to Country Day on Jan. 22, Riverside Academy took out some aggression on West St. John Tuesday with a 112-63 win.

Still, it was a commanding victory. Malik Crowfield scored 20 points and was one assist away from finishing with a triple-double. He had 12 rebounds and nine assists.

East St. John closed out the first round of District 7-5A play Tuesday with a 51-47 win over visiting Central Lafourche.

That puts the Wildcats (13-9, 5-1) atop the district standings — for now. Central Lafourche and H.L. Bourgeois finished the first round at 4-2.

“It feels really, really good,” Wildcats coach Yussef Jasmine said. “To know we can play like we have against the level of competition we’re facing in our district, it feels pretty good. We can’t peak now, though. We still have to keep climbing.”

Raekwon McKnight, who recently regained his eligibility, led the scoring with 17 points. Troy Green followed with 15.