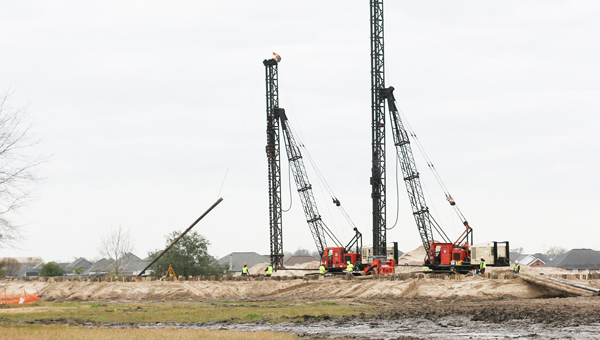 LAPLACE — Shawn Wallace has heard the questions all too often.

“A lot of parents have been asking, ‘When are we going to get back in the school?’” he said. “Now, we can give them the answers to any questions they have, letting them know where we’re at with this.”

Wallace and the rest of the St. John the Baptist Parish School Board, along with numerous school district leaders, plan to celebrate Lake Pontchartrain Elementary School’s construction during a ground-breaking ceremony at 4 p.m. Thursday.

The school is being rebuilt back on its original site along U.S. 51 in LaPlace. New construction calls for 110,600 square feet of space, including a gymnasium, to serve up to 800 children in grades prekindergarten though eighth.

The school site has been unused by students since Hurricane Isaac struck the region in 2012. Lake Pontchartrain Elementary students and staff members are currently located in a temporary site at the rear of East St. John Elementary.

Wallace, whose district includes the new construction, said he is excited for the school leaders to host a public town hall on the project for interested parents and residents at 6 p.m. Feb. 3 at the LaPlace library. The meeting will start with a presentation from construction officials before opening up for questions from attendees.

“I don’t think we’ll have any setbacks (with the construction going forward,)” Wallace said. “We’re going to move forward with it. We’re going to stay positive and make sure this construction is on schedule so we can get the kids back into a brand new school.”

The Lake Pontchartrain Elementary construction timeline calls for final completion Nov. 4, 2017, and the building open for student use on Jan. 7, 2018.

That is a delay from a schedule originally adopted in 2015 that called for the school to be rebuilt and open in August 2017.

Cindy Janecke, with All South Consulting Engineers, which is serving as the project manager, placed the blame for the delay at the school district’s demolition contractor, who fell behind schedule  “for a couple of reasons that are essentially internal to their company.”

According to Janecke, the school will be elevated above ground level through FEMA guidelines to avoid similar floodwater should it occur again.

She said the structure will have a brick exterior with a media center in front, which could be used for PTA meetings and community events.

“The way the school is designed, you will be able to access that separately without having to get into the whole school,” she said.

“The school has hurricane construction in the doors and windows. The pre-k and lower grades are in one wing, the second, third and fourth graders are in another wing and the upper students are in another.”

Janecke said the wing design avoids having little children and older students in the halls at the same time.

“Still, it’s all easy access for each of those areas to get into the main part of the school, where the cafetorium and media center are,” she said.

Motorists passing can see crewmembers driving piles for the school’s foundation, a process that should take several weeks.

Superintendent Kevin George said Lake Pontchartrain Elementary’s opening would serve as a “beacon of light” for those coming into St. John the Baptist Parish off Interstate 10.

“When someone comes in off the Interstate and drives, there is a community center, a library there and a brand new Lake Pontchartrain Elementary,” he said. “People are going to see that the public really invests in our children and in our community. That’s going to be a shining light as people drive into this parish.”