Patient play pays off for ESJ 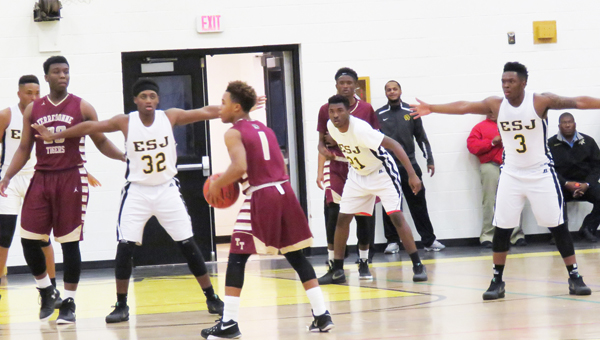 East St. John’s Korey Lee, No. 32, Juan Hicks, No. 21, and Blake Johnson, No. 3, set up a wall of defense against Terrebonne Tuesday. (Lori Lyons/L’OBSERVATEUR)

RESERVE — East St. John coach Yussef Jasmine is a patient man, but he said even he gets bored sometimes watching his team.

“Everybody likes to run it,” Jasmine said. “Of course that’s more fun to watch. Sometimes you’re like, ‘Man, this pace is so slow.’ But when you see that it’s working, you know, you have to just keep going. Even as a coach you have to be patient.”

The Wildcats’ slow and steady pace is what has them boasting a record of 12-9, 4-1, and it is what helped them get victories last week over Destrehan and Hahnville and a 66-49 victory Tuesday against Terrebonne.

Once again, sophomore Allen Williams led the scoring with 12 points. Jarrel Payton scored 11, as did Ja’von Antonio. Senior Troy Green, who spent much of the game on the bench in foul trouble, finished with nine points. Perhaps more impressive, the Wildcats turned the ball over a mere six times.

“Once again, our young players stepped up,” Jasmine said. “Coaches talk all the time about their players buying in. Our guys are buying in. They’re seeing that slowing the game down is winning us games. This team is progressing. As a coach, I feel like we’re in a really good place. Every coach wants to see his team get better and peak at the end.”

Riverside Academy hit a speed bump Wednesday night in the form of Karr. After beating the Cougars twice this season, once in the final of the Country Day Tournament and again in the final of the Sugar Bowl Tournament, Riverside lost the third match-up 71-58.  Malik Crowfield scored 25 points and Jared Butler scored 15, but the Rebels fell behind early and never caught up.

Wednesday’s loss ended the Rebels’ 13-game winning streak and dropped the team to 13-4 overall. Riverside is 2-0 in District 12-2A play after taking an 81-62 win over Newman Tuesday. That was a much more typical Riverside game as the team hit 14 3-pointers in the first half, alone, and finished with 19. Crowfield led with 26 points, including eight 3-pointers. Butler scored 19 points with five 3-pointers. Herb McGee scored 14 points with four 3-pointers.

“It was a really tough game,” Comets coach Kemper Todd said. “They are really talented.”

But the Comets came back Wednesday to take a 66-34 non-district win over Holden to improve to 10-9. Kelly scored 24 in that one with five 3-pointers. Arceneaux finished with 12 points. Zach Weber scored 10.