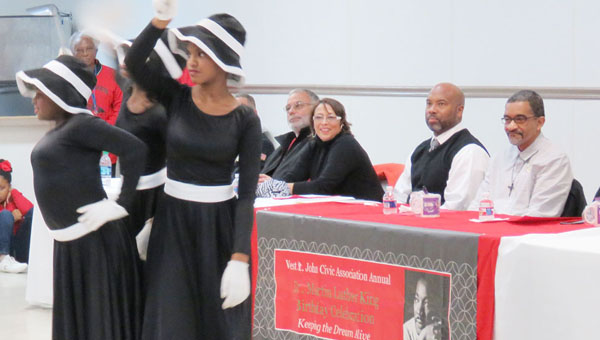 EDGARD — While many of her schoolmates may have slept in on Monday then taken the day off to relax, West St. John Elementary School student Alaycia Cannon, 8, spent her day marching for a memory.

“Today I’m marching for Martin Luther King’s birthday,” Cannon said. “He showed us peace, and we just love him.”

Along with the West St. John High School Band and dance team and several members of the local civic group, the small parade meandered down River Road from the Roland Borne Sr. Memorial Library to the West Bank Community Center. There, they were joined by approximately 100 residents and local dignitaries for an hour-long program to remember the late civil rights leader. Councilman Kurt Becnel served as Grand Marshall.

“A lot of the people here were born after Dr. King died,” Judge Jasmine said. “To them, he’s just a name. He’s a name in the book that they hear about. We want to bring him alive to them so they can know and recognize his struggle so they can appreciate what their families are doing for them.”

St. John Parish School Board member Russell Jack was one of the march’s organizers, along with Jasmine and Josephine Jackson.

“The goal is just to keep the dream alive and just to let our young people know how much Dr. King meant to us all,” Jack said. “We just want to keep his legacy going as much as we can.”