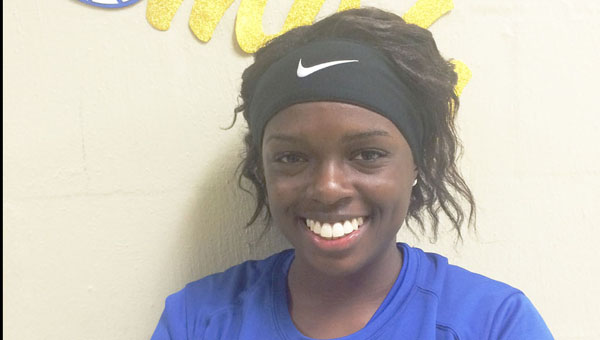 LAPLACE — When she was in the fourth grade, Lela Hill wanted to be a veterinarian.

Lela Hill takes the ball up court for the Lady Comets.
(Photo
submitted)

After a chemistry class, she wanted to be a chemical engineer. Later, it was a forensic scientist. These days, Hill is pretty sure she wants to be a pediatrician.

But through all these years there has been once constant in Hill’s life — basketball.

Ever since Claude Hill Jr. — himself a former standout basketball, football and baseball player at Higgins — first put a basketball in his 6-year-old daughter’s hands and signed her up for a co-ed team, she has almost always known what to do with it.

“I saw a spark from the beginning,” said the senior Hill, who is the principal at West St. John High. “I’m not going to say she got it from me. I was an athlete in high school and knew I wanted to occupy her time and her brother’s. I knew she had the potential, but most parents say that.”

Now 17, Lela Hill is a senior guard on the St. Charles Catholic team who is doing amazing things. She averages 14.5 points per game. The next highest average is 6.3.

St. Charles coach Kim Nunez, who took over the team this season, said it’s great to have such a player on her team.

On the other hand, Nunez said it’s a blessing and crutch.

“I think some of our other players look to her to score instead of looking to themselves,” Nunez said. “They have gotten used to letting her do all the work.”

Hill said she feels that pressure at times, too.

“Sometimes in close games maybe it’s a lot of pressure, but it’s not anything I wouldn’t want to rise to,” Hill said. “They have faith in me, I have faith in myself and I just have to put the work in, get the job done.”

Hill doesn’t just excel in basketball. She is a standout volleyball and softball player, besides being an honor student at St. Charles with an ACT score of 31. The only sport she hasn’t tackled yet is track, but it’s not for a lack of trying on the part of Comets coaches.

“They’ve been trying to get me to do track since I was a sophomore,” she said. “They’re still trying. I just never could do it because of the softball schedule.”

Hill said she would have a hard time picking a favorite. She hasn’t even decided which sport she wants to pursue in college.

“I told her about three years ago she could pick just one (sport),” Claude Hill said. “I figured she would really excel if she focused on just one thing. She’s really much better at softball. The reason she stands out in basketball is just because she is so quick. But she’s height-challenged. I call it altitude challenged. When she broke the 5-foot barrier I was happy.”

Besides her goal of someday becoming a pediatrician, Hill has a more immediate goal of getting her team to the playoffs. It has been more than a decade since the Lady Comets made it to the postseason. The team entered District 12-2A play Jan. 12 with a 31-30 victory over Country Day to improve to 14-6, then lost to Riverside Academy 55-38 on Thursday.

“I want to be able to say I was on the team that got to the playoffs,” Hill said. “It’s not going to be easy, we know.”

It hasn’t always been easy to be a member of the Lady Comets. The team has gone through several coaches over the last few years. Hill alone has had three in her time at St. Charles. Each brought a different style.

“It’s been kind of up and down,” Hill said. “The first coach I had wanted us to do everything slow. Then I got another coach who wanted everything to be fast, fast. We went from this turtle pace to being this hare pace and we’re trying to catch our breath. There was all this stuff that we have to catch up on because other schools are at this level, and we’re at a different level because our coach thought we were a different kind of team.”

Nunez said this year’s team is adjusting to her style.

“I’d call it growing pains,” Nunez said. “We had a three-game losing streak, which was our longest this season. W e’ve gotten into that mindset that, ‘OK. Lela’s got it.’ We still need scoring from everybody else.”