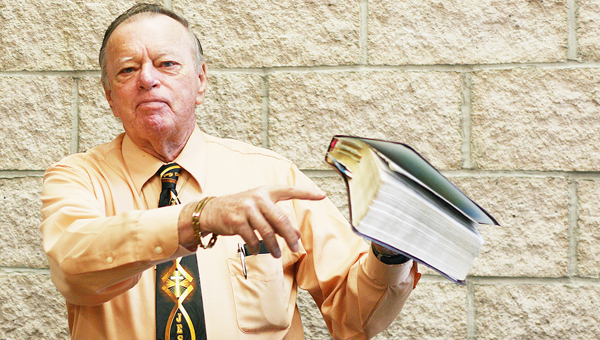 RESERVE — Bill Harrier visits with Southeast Louisiana War Veterans Home residents Wednesdays and preaches and holds a Bible study Saturdays for those who wish to attend.

Recreational therapist Sonya Herbert said Harrier has been coming to the Veterans Home for two years, adding residents are responsive to his visits and Bible studies.

“He has a good following here at the Home,” she said.

“He is very well educated in the Bible. When he does the Bible study, he knows how to explain things so the residents can understand. He is very patient with them and you can tell he enjoys what he does.”

Herbert said Harrier doesn’t pass anybody without some form of acknowledgement.

“He’ll stop and visit with people and ask how they are doing,” she said.

“The residents know him well, they’ve seen him for two days a week for two years. He has become their buddy.”

Harrier wears many hats, but when he is at the Veterans Home, he is a Baptist minister.

He first got started when the pastor at First Baptist Church is Reserve told Harrier there was a need for a ministry a the Home.

With his strong faith and being a Veteran himself, going to the Home in Reserve seemed like a perfect fit.

“I have been accepted by everyone, it’s like I’m part of the family,” he said. “The staff and residents have welcomed me with open arms, and I just love it.”

Harrier normally visits the War Home in the afternoons on Wednesdays and holds Bible study at 10 a.m. Saturdays in the on-site chapel.

“At Bible study, the number of people that attend varies from five or six and up to as many as 12, 13 or 14,” he said. “It’s a Bible study, but I do preach too. I preach a message then open it up for questions. I try and answer their questions to the best of my knowledge to try and help them understand what the Scripture is trying to tell us.”

Harrier preached through the 24h and 25th chapters of Matthew a year ago. It took him about 10 weeks to go through.

He finished around Easter of last year.

“I asked the group if anyone had an idea of what they would like me to preach on,” he said.

“I asked them what is something they wanted to learn. One gentleman in the group, his name is Larry Smith, said he would love for me to teach the Book of Revelation. I asked him what part, and he said all of it. So I started the Saturday after Easter.”

The group just finished the Book of Revelation this month. Next, the group will talk about Heaven, then Harrier will open it up for suggestions.
Harrier knows what he is doing is making a difference in people’s lives.

“He said, ‘you know I’ve read through the Bible three times and I’m starting to read through it again. I never fully understood what the Bible was saying to me until I started going to the lessons and learned from what Bill brings to us.’ It made me feel like I was doing exactly what God has called me to do, bringing His Word to the people in a way that they can understand it.”