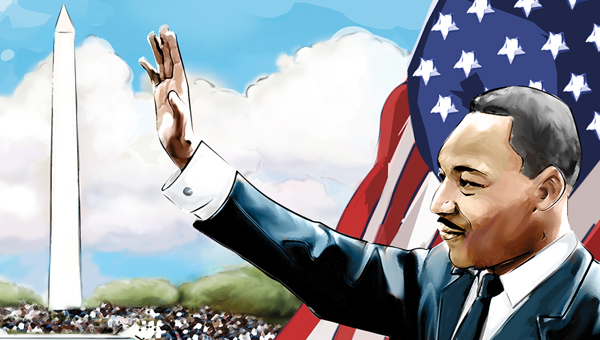 LAPLACE — The entire St. John the Baptist Parish community, on the East and West Banks, are encouraged to participate in marches Monday to honor of Martin Luther King Jr.

The first march begins at 9 a.m. in LaPlace. Marchers start at East St. John Elementary. Then will walk up Belle Pointe Boulevard, go down Airline Highway and end at the Percy Herbert Building, where a rally will be held.

One group that has been marching on Martin Luther King Jr. Day for at least 10 years is the Omega Psi Phi Fraternity, according to Ernest Parquet, the immediate past ninth district representative.

“It’s a parishwide thing,” Parquet said. “Most of the parish officials participate. Rev. Forell Bering from Bethlehem Baptist Church is the one that organizes it. There are typically a couple of marching bands and dance teams that participate.”

Parquet said the fraternity participates to recognize the accomplishments, dedication and work of Dr. King.

“Its appropriate to take time to recognize him,” he said.

“It feels great participating in the march. (Martin Luther King Jr.) is one of my personal, favorite people in history. Some of the things that were done during the Civil Rights movement, and the way people committed and put their lives on the line to stand up for what was right — to me it’s one of the most important periods in American history.”

Similar to the event in LaPlace, there will be a march and program.

The West Bank march begins at noon at Roland Borne Sr. Memorial Library in Edgard and finishes at the West Bank Community Center.

“Every year we have one honorary Church and they bring their choir to sing. This year West St. John has a choir and they are going to perform at the banquet, and we have a reception afterwards. Everyone is invited. It’s a community thing.”

Roybiskie said the march and celebration allow everyone to get together and enjoy each other.

“The response from the community is tremendous,” she said. “As a matter of fact, at our program, it is normally standing room only.”

Roybiskie said she doesn’t participate in the march because knee concerns but focuses her attention on the program.

“I make sure everything is prepared for that,” she said. “It’s always such a pleasure seeing so many people who appreciate what is happening on that day. The comments that we get from the community are always positive ones, so we know they appreciate everything we do. To me, the important thing is you have unity among the members of the community.”

Who is St. John Parish’s Officer of the Year?