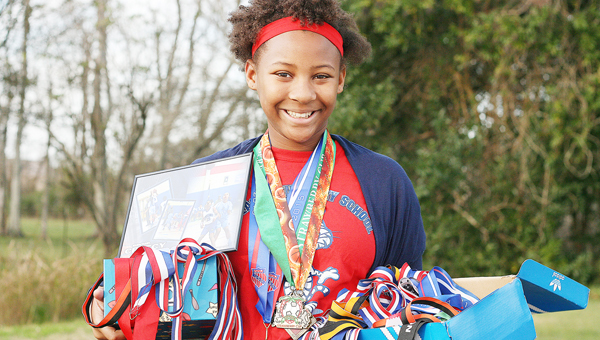 Anya Creecy shows just some of the medals she has earned in her athletic career.

LAPLACE — Anya Creecy could be categorized as a very active child. She competes in a number of sports and has at least four shoeboxes full of medals.

“In track, I do shot put, discus, javelin and I sometimes run the 200 and the 100 meter dash and hurdles,” Creecy said. “Shot put and discus are my favorite. They are just easier for me. In basketball, I’m a center and in soccer, I’m a goalie and a defender.”

Creecy first got involved with sports when she was 4.

The budding athlete said her life would be drastically different if she wasn’t part of any sports teams.

“I would be chubby,” she said with a laugh. “I wouldn’t have anything to do in my free time. My cousins and my sister also participate in track and basketball, so I have company. We play and hang out at track meets when we aren’t competing. We also hang out after the meets and on our way home.”

Competing and doing well in sports means a lot to the budding athlete.

“It feels good winning an award because it makes me feel like I achieved something,” she said.

Out of all of her medals, Creecy has a favorite.

“It’s my highest-placed medal,” she said. “Its for discus. I got it in July at the championships in Orlando. I threw the discus 66 feet and I got third place. It was my farthest throw and it felt good.”

Creecy is a member of the St. John Legends track club, which participated in the track club national championships in Orlando. Along with placing third in discus, Creecy also placed fifth in javelin, sixth in shot put and was ranked top 10 nationally in discus.

“During track, she is very cooperative,” Barnes said. “She is quiet and mild mannered but also eager to participate in any event that you put her in. She is a very talented thrower, very focused. She is aware of her competition and tries to do her personal best every time.”

On the occasion Creecy doesn’t place or do as well as she would have hoped, she doesn’t give up.

“She is disappointed but then she will go back and replay everything with me or her father (who is her club track coach,) adjust what she needs to and go back and try harder next time she competes,” Barnes said. “Anya is a hard worker. She is committed and is definitely someone we want to watch in the future.”

Giving Back: Catholic Daughters of the Americas continue commitment