Giving Back: Catholic Daughters of the Americas continue commitment 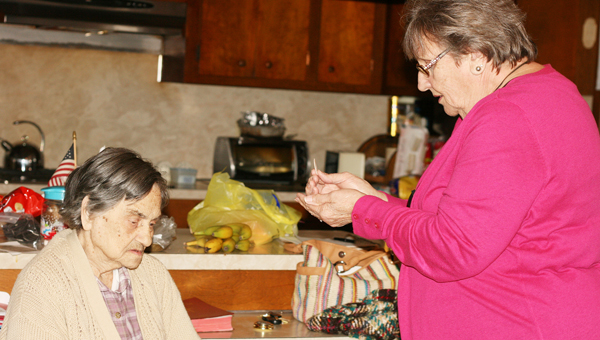 Glenda Wactor, right, gives her godmother, Mabel Clement, Holy Communion Monday morning at Clement’s home. Wactor performs that service and many others as a member of The Catholic Daughters of the Americas. (Raquel Derganz Baker/L’OBSERVATEUR)

LAPLACE — Early Monday morning Glenda Wactor went to Mass, then went to her godmother’s home — much like she has done many days in the past.

Wactor prayed, shared the Gospel reading of the day and distributed Holy Communion.

Her godmother is ill and unable to make it to Mass. Taking care of the sick and those in need is a focus of the Catholic Daughters of the Americas.

Wactor said it’s important to visit those who cannot make it out of their homes.

“Distributing Communion to the home-bound is part of our Spiritual Enchantment,” she said.

The Catholic Daughters of the Americas strives to embrace the principle of faith working through love in the promotion of justice, equality and the advancement of human rights and human dignity for all.

In 1941, 28 local women brought those principles of the national organization to the River Parishes.

St. Joan of Arc Court #1334, which today has more than 30 members, was instituted as the 29th court in Louisiana. The court is still active after 75 years supporting the National and State Catholic Daughters of the Americas, as well as local people in need. The Court includes women from Ascension of our Lord Church in LaPlace, St. Hubert Church in Garyville, St. Peter Church in Reserve and St. Joan of Arc in LaPlace.

Wactor, who serves as Court regent or president, has been involved for a number of years.

“It is a wonderful and satisfying experience being part of such a large number of Catholic women,” she said. “Because of our numbers, we can support and help people in the United States, here in Louisiana and right here in the River Parishes. The Archdiocese of New Orleans consists of four courts of beautiful women doing God’s work.”

The Catholic Daughters of the Americas administers scholarships, gives to charities and strives “to be helping hands where there is pain poverty, sorrow or sickness.”

Wactor said the organization helps those in need through disaster relief, working with Habitat for Humanity, scholarships and much more.

On more of a local stage, Wactor said the organization holds food drives for the St. John Ministry of Care, visits the Southeast Louisiana War Veterans Home on Veterans Day and at the end of January will visit Twin Oaks Nursing and Convalescent Home in LaPlace to celebrate birthdays. The list of different activities the court participates in is lengthy.

Sylvia Perque, recording secretary for the court, said Catholic Daughters sponsors a local youth as a part of the CDA kid program.

“The CDA kid is a child that has special needs that we sponsor,” she said. “One year we had a little boy that had a brain tumor. Due to its location, they couldn’t remove it. We sponsored him all year he was 12 years old. We sent him birthday wishes, something at Christmas and something at Easter. Then on the State level, they presented him with $300, the money was to be used as the parents saw fit.”

Perque, who has been a member of the organization for over 40 years, believes in her heart the Catholic Daughters of the Americas does good work on every level.

“I think it’s a good organization,” she said. “I enjoy working with them. Every month we have something that we do and we look forward to doing it. Our motto is Unity and Charity.”

For women interested in being a member of the local court, call 985-652-6651 or attend a meeting, which take place the first Tuesday of the month at 2:30 p.m. at the Lacour Center in Reserve.

“We need new members, really bad,” Wactor said. “We need people to carry on with the work that we do.”