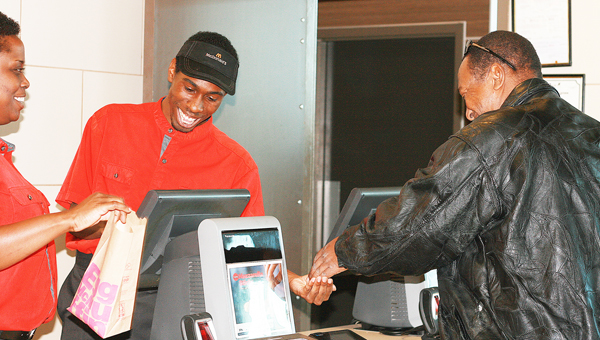 McDonald’s employees, from left, LaShawn Singleton and Tevin Mizell serve a customer Wednesday morning with their trademark smiles, a pleasant experience Mizell has become known for in LaPlace and beyond. (Raquel Derganz Baker/L’OBSERVATEUR)

LAPLACE — For a little over a year now, one local man is doing his part to bring smiles to the faces of his customers.

Tevin Mizell, who said he has always worked in the service industry, currently works at McDonald’s on West Airline Highway in LaPlace. Mizell likes his job because he loves his interactions with customers.

Mizell, 24, of LaPlace works different stations at the restaurant, but said as long as he gets to interact with people, he is happy.

“My favorite positions are the front desk and the back drive-through,” he said. “I get to talk to my customers.”

Many LaPlace and greater St. John the Baptist Parish McDonald’s customers probably know Mizell’s face, if not his name. Any customer who visited the fast food restaurant and was called “my love” probably had that interaction with Mizell.

It means everything to Mizell to bring a smile to people’s faces. He gets to know the people he interacts with on a daily biases, collecting a group of regular costumers.

Mizell can rattle off by heart numerous regular customers’ orders without blinking an eye.

“I have my regulars I see at McDonald’s, then I have my regulars from when I worked at Waffle House that come see me,” he said. “I probably have 15 or 16 regulars, at least. They are my boos. We have a dynamic, and I love to see them smile. That’s where I get my energy from, I get it from my customers.”

Mizell said it’s easy for him to smile at work because he knows he will get a smile back. Sometimes, Mizell doesn’t get a positive reaction from his customers, but that’s OK.

“I understand some people have bad days,” he said. “I always want to try and make someone’s day. I want to make them smile.”

According to his manager, Nichole Wenzy, customers respond well to Mizell’s positive energy.

Wenzy has been working with the company for more than 20 years and she said she has never worked with anyone like him.

“Tevin is one of a kind,” she said. “When you want to frown, he makes you smile. That’s just Tevin. Working with him, there is never a dull moment. It’s great working with him. I’ve never experienced anyone like Tevin.”

“There isn’t a person that meets Tevin that doesn’t like him,” she said. “A lot of customers come back just to see him. Even when they are down, they say he lifts their spirits. He is the joy of the store.”

Mizell’s dedication, hard work and upbeat personality have been recognized by local patrons who raved about him on Facebook, leading to cooperate officials making a trip to LaPlace to meet him in August.

“I got to meet the owner,” he said. “I got a gift card, my own little personal cup and was just shocked. I was just doing what I was supposed to do; it just caught me off guard. To this day, I still think about that gesture. To me, it was a very big gesture. All of the places I’ve worked, I’ve never had anyone do something like that for me.”

Soon Mizell will use his people skills to reach his dream of becoming a real estate agent.

“Everyone has told me how I have a way with words and also dealing with customers,” he said. “My dad was actually going to school for real state, that’s what gave me the idea. Honestly, I don’t feel like it would be to different from what I do here. There is still customer interactions. I’m trying to get them what they need for the supply and demand. I feel like I would still be working in the same skill set.”