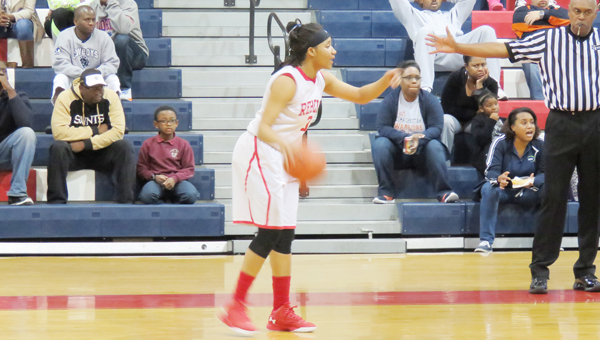 RESERVE — The Riverside Academy Lady Rebels took a little bit of a break over the Christmas holidays, going from Dec. 22 to Monday night without a game.

Riverside coach Kathy Luke said it wasn’t the time off that did her team in Monday night. It was all Houma Christian. The Warriors came to Reserve with speed, agility and an aggressive defense to take a 41-25 victory over Riverside in a non-district contest.

Ja’Keyra Gautreaux led Riverside with 18 points. Dannecia Nora finished with seven and Bria Neil had one 3-pointer. No other Rebels player scored.

Houma Christian got 11 points from Dee Thomas, nine from Kourtney Lee, six from Alicia Johnson, two from Brennan Harding and one from Delisha Williams.

While the Rebels (10-4) tried to find open lanes, Houma Christian (17-4) was closing them. When Riverside did try to drive, more often than not the Warriors were forcing turnovers. The Rebels turned the ball over seven times in the first quarter alone, helping Houma Christian take a 9-8 lead. Lee scored six of her team’s points in that period.

Houma Christian did most of its damage in the third quarter, holding the Lady Rebels scoreless in the period. Riverside did not score any second-half points until the opening seconds of the fourth quarter when Neil sank her lone 3-pointer. She was fouled, but missed the free throw. Gautreaux put in four more points in the final period.

Luke said her team put in the time needed over the break, but just didn’t play well Monday.

“We practiced every day except New Year’s Day and Christmas Day,” she said. “We practice for them, we were prepared for them. We had plenty of tape on them. We knew what they were going to do. I thought we made some silly turnovers that they converted into points. Other than that, we held them in the first half, and then they started to stall and we knew we had to go out and get them. Playing them man-to-man was not good for us because they’re so quick.”

Now the Rebels must prepare for this week’s Allstate Sugar Bowl Tournament, which will offer some even stiffer competition.

St. Charles Catholic was the only boys team in action over the weekend as the Comets took a 51-36 victory over Ascension Christian on Saturday. Jobe Kelly led the scoring with 12 points. Jordan Arceneaux scored 10 and Robert McDonald scored nine.

The Comets were 9-8 heading into Tuesday night’s game at St. Amant.

All local teams returned to a full slate this week. Highlighting the schedule is tonight’s tilt between East St. John and the Comets at St. Charles. The girls game begins at 6 p.m., with the boys game following.