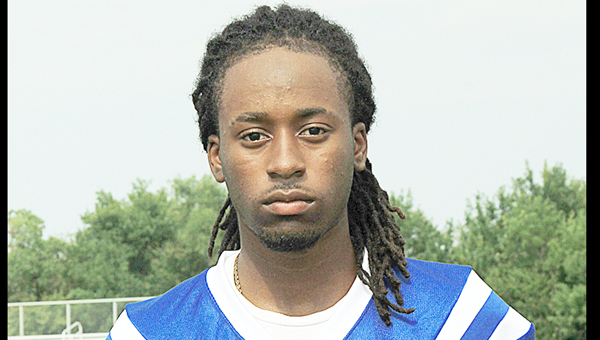 It was quite a year for River Parishes football in 2015, with three area teams making it to the Mercedes-Benz Superdome to vie for a state championship trophy. Only one took one home.

Riverside Academy linebacker Evan Veron is the All-Parish Defensive Player of the Year. He finished the season with 78 tackles, 57 assists, 38 tackles behind the line and nine sacks.

Such seasons are only made possible because the area produces so many talented young men who give their all on the football field. L’OBSERVATEUR’S 2015 All-St. John the Baptist Parish team offers just a small sampling of such talent.

The Riverside Academy Rebels were one of the teams that made it to the Superdome this season with hopes of winning the Division III Select Schools state championship. Those hopes were dashed by Notre Dame of Crowley, 13-3, and the Rebels returned home with their fourth state runner-up trophy.

Riverside head coach Bill Stubbs was the man who got them there. Just four years after being lured out of a 10-year venture into private business following a 15-year career (and three state championships) at Salmen, Stubbs led the Rebels to an 11-2 finish and a trip to the Superdome for the first time since 2000. More to the point, the Rebels twice defeated cross-town rival St. Charles Catholic, including a 34-14 semifinals victory that propelled the team into the finals.

Not much went as planned after that, however. The Rebels were stifled by Notre Dame’s defense, which gave up a total of 52 points all season — including Riverside’s 3 points. Still, the Rebels can — and do — look back on this season with pride. This year’s seniors were the first to be indoctrinated into Stubbs’ program and the work they put in showed in the results on the field. Stubbs is the All-Parish Coach of the Year.

One of the keys to Riverside’s success this season was its defense, which held five opponents to one touchdown or less. Rebels linebacker Evan Veron, a 6-foot, 215-pound senior who has committed to Nicholls State, is the All-Parish Defensive Player of the Year. He finished the season with 78 tackles, 57 assists, 38 tackles behind the line and nine sacks. In the championship game alone he had eight solo tackles, three assists, two tackles for loss and two forced fumbles.

West St. John’s season started with much promise under first-year head coach Brandon Walters and ended with a heart-breaking 36-34 loss to Mangham in the quarterfinals. A missed 2-point conversion was the difference between the tie and the loss. Leading the Rams all season was quarterback Jermoine Green. The 5-10, 170-pound senior finished 164 of 287 for 2,506 yards and 27 touchdowns with 10 interceptions.

He is the Offensive Player of the Year.

Some might say St. Charles Catholic had a disappointing season, even with a 10-3 finish and a trip to the semifinals. Injuries hampered the Comets early and a pair of losses to Riverside stung — especially that last one.

But, it was East St. John that struggled. With a new head coach and a multi-talented would-be quarterback who had to remain on the sideline for nearly half a season, the Wildcats stumbled to a 2-8 finish and missed the playoffs for the first time since 2001.

Both teams still boasted talented players worthy of their spots on the All-Parish Team.

Just one of several of the Rebels’ weapons this season, Sanders had 152 carries for 1,070 yards, and nine touchdowns.

When Green wasn’t throwing, he was handing off to this stellar rusher, who finished with 1,143 yards and nine touchdowns.

Green’s primary target this season, he had 73 receptions for 1,226 yards and 12 touchdowns.

Easily the best wide receiver on this year’s team, the senior had 54 catches for 1,182 yards and 12 touchdowns.

He was the main blocker for the likes of Sanders, Herb McGee and Jared Butler.

A returning selection from last year’s team, Arceneaux was the Comets’ best blocker. He has committed to Nicholls State.

A solid force up front, Cannon helped block for Green on all those touchdowns.

With size and strength, Robinson was another bright spot for the Wildcats this season.

Besides his blocking duties, Wilson had 12 carries for 54 yards and a touchdown this season.

Easily the most prolific scorer on the Rebels team with 735 points, Gauthier was the offense’s no-so-secret weapon. He was 34 of 36 on PATs in the regular season with his two misses blocked. Of 41 kickoffs, 35 went for touchbacks. He kicked a school record 52-yard field goal against Country Day and scored his team’s only points in the state championship game on a 41-yard field goal. He averaged 36.6 yards on punts with a long of 50. He also played receiver.

Pressed into service after two starting quarterbacks got hurt, McGee took over the offense reluctantly. He finished with 724 yards passing, 405 rushing and 301 yards receiving with 13 touchdowns.

Came through with 88 tackles, 17 tackles for loss, four sacks and two fumble recoveries.

A bright spot on the Wildcats’ defensive side, the junior recorded 66 tackles and had one interception.

He recorded 68.5 tackles, nabbed five interceptions and had 16 pass break-ups for the Comets.

Besides his 29 tackles and 29 assists, Walters had 12 interceptions for 183 yards, two fumble recoveries and seven pass break-ups.

This speedy runner had 10 punt returns with one touchdown, plus he amassed 80 yards on kickoff returns.