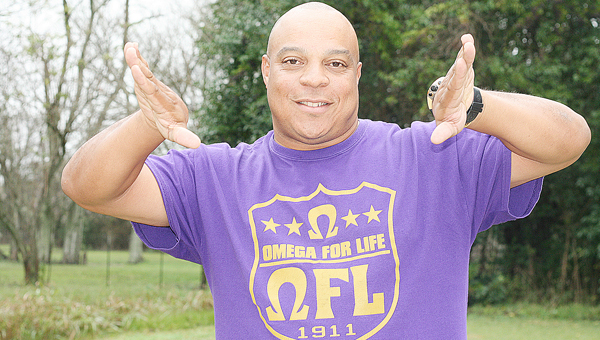 LAPLACE — Manhood, Scholarship, Perseverance and Uplift: Those are the core principles of Omega Psi Phi Fraternity.

Ernest Parquet, the immediate past ninth district representative, was one of 16 men that started the Omega Psi Phi Fraternity chapter in the River Parishes.

The fraternity was founded in 1911 at Howard University.

The organization has more than 800 chapters globally, with more than 100,000 members. One of those chapters is located in the River Parishes.

Chapter president Eric Wright said local members, which include approximately 50, are all about service to the community.

“We always try and raise money to give back to the community,” Wright said. “Some of the things that we do are our school supply giveaway, our annual blood drive, our annual highway clean up and we also march for Martin Luther King Day.”

As the chapter president, Wright said helping St. John the Baptist Parish means a lot to him. He enjoys giving back because there were people over they years willing to help him through school and life.

“It feels good leading a group of brothers who are committed to giving back to the community,” said Wright, who had led LaPlace Omega Psi Phi for two years. “We’re all on the same page and we’re all in the business of serving the community. It’s a pleasure to serve at this position with these guys.”

One of the chapter’s founders is still an active member of Omega Psi Phi. Ernest Parquet, the immediate past ninth district representative, was one of the men who spearheaded the chapter’s beginning 23 years ago.

“Those chapters didn’t really extend to the River Parishes area to do community service and to work with high schools and those kinds of things.”

According to Parquet, founding members in the area “saw a need,” so they petitioned the Fraternity to start a graduate chapter in LaPlace.

The LaPlace chapter, according to Parquet, is part of the ninth district, which spans multiple states, including Louisiana, Arkansas, Oklahoma and Texas.

Parquet echoes his chapter president’s comments on the importance of assisting and being present in the community.

“Our Fraternity has a number of different programs that we try to drive,” Parquet said. “We have some that are called ‘mandated’ programs, and there are 10 of those.

“Then, some of our primary programs are mostly social action, which is one of the biggest things that our Fraternity tries to do.”

According to Parquet, it is important for the Fraternity, wherever the chapter is located, to make a positive impact.

“We try to give scholarships to deserving students,” Parquet said. “Internationally, our Fraternity awards more than $275,000 in scholarships.”

The Fraternity is also trying to help with crime prevention, especially with young black males, according to Parquet.

Through their mentoring program and other activities the, Fraternity focuses on violence prevention, especially violence against women.

Parquet he feels there is still a portion of the population of the community that does not know the local chapter exists.

“We need to continue to let people know that we are here,” he said. “If there are needs out there, our job is try and address those needs with whatever resources we can.”

According to Parquet those men interested in joining the local Omega Psi Phi chapter can mail in a letter of interest to PO Box 405 LaPlace, LA 70069.