Some rain in New Year forecast 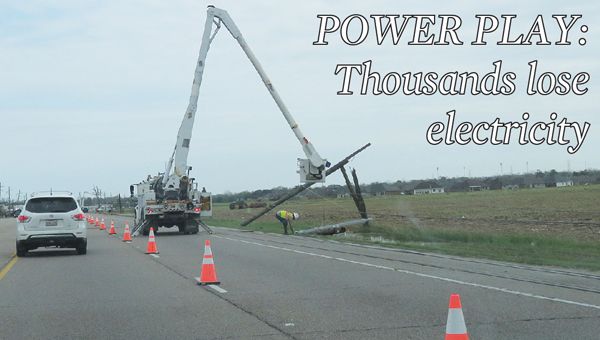 Approximately 2,000 households lost power in greater LaPlace after close to two-dozen electrical poles were knocked down during an overnight storm wreaked havoc Sunday night and into Monday morning.

“That is pretty substantial damage,” she said. “They are connected with wire, so when one falls, there is a kind of domino effect. It does take time to replace the poles, all the wiring and the other equipment that is on the poles. The people that live out there are being real patient with us, and we appreciate it.”

He said the region was victimized by “downburst wind gusts” of 70 miles per hour; however, the snapped power lines were impacted by winds stronger than 70 mph.

The National Weather Service also reported a tornado with winds of 100 mph touched down early Monday for five minutes along Airline Highway. It was classified as an F1 with a path that stretched for 150 yards.

Krautmann said partygoers on New Year’s Eve should expect a daytime high of 60 and a nighttime low in the mid-40s. For New Year’s Day, a high in the low 50s is expected with a slight chance for showers during the night.