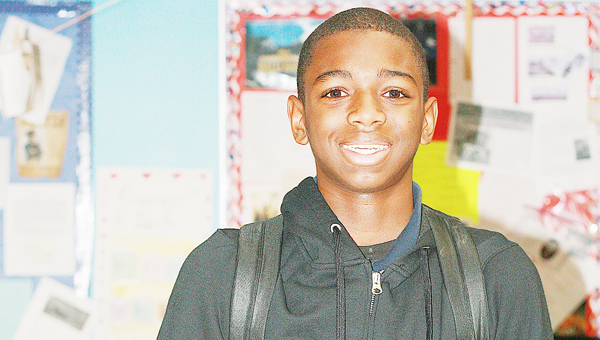 Christopher is a seventh grader at John L. Ory Communications Magnet Elementary School, and teacher Natalie Klibert has seen his strong work for the past two years.

Klibert teaches sixth through eighth grade social studies and has worked with Christopher on the Student Council for two years.

When she found out he would be moving on to the next level in the social studies fair, she wasn’t surprised.

“I’m super proud,” she said. “I expected it from him. He gives everything. He puts in 110 percent, and I think that’s why he is such a good student. It really shows, because he gives everything so much effort.”

Klibert described Christopher as always prepared, saying, “He is always digging deeper. He isn’t just interested in what something means on the surface but what the effect is long term. He is always encouraging other students. He is never mean and he is very positive and uplifting to everyone around him.”

Klibert described Christopher as a quiet and reserved student who doesn’t talk out of turn.

“He always says yes ma’am, he is very well behaved and very well mannered,” she said.

School is important to Christopher, who said his parents are the ones who inspire him to succeed. In the recent social studies fair, he did is project on “1811 German Town Slave Upraising.”

“It feels good moving on, because I never really liked social studies, it’s like my third favorite subject,” he said.

“I appreciate the fact that I placed first and that I’m moving on and get to present my project.”

The seventh grader said he usually has all As, adding sometimes there is a B in there.

His favorite subject is math because it’s just plan facts and doesn’t have to do with comprehension.

“I like solving equations, because sometimes it seems difficult, but when you get the hang of them, they are really easy,” Christopher said. “I also like how different rules go with different equations.”

After years of practicing, Christopher has found a way to balance staying on the honor roll and competitive swimming.

“At first, it was kind of hard,” he said. “But now that I’ve gotten a route, it’s not as challenging. While I’m at school, I make sure I pay attention real closely, then after school, I go to swim practice, which is sometimes in Metairie. Sometimes, on my way from school to Metairie, I study. Then, later when I get home, I do my homework.”

Christopher has been swimming for four years.

His main events are the 100 freestyle, 100 butterfly and 50 freestyle.

He does not really like other sports, and only started swimming because his mom wanted him to learn for safety purposed. He ended up liking it, eventually deciding to swim competitively.

He is inspired to swim by his coach and Michael Phelps, who Christopher feels is the best swimmer in the world.

“I want to be just like him, or even better than him,” Christopher said. “My coach inspires me, because she is just awesome, and I wouldn’t be as good as I am today without her. She has been my coach all four years.”

His favorite parts of swimming are the thrill of competing against other swimmers and making new friends.

“I’ve always wanted to be a leader figure, but I didn’t really have a chance to do it, and Student Council was my opportunity,” he said.